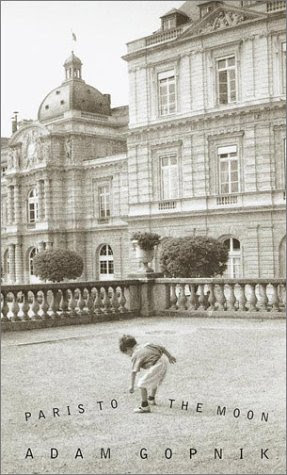 Paris to the Moon by Adam Gopnik

In 1995, the Gopnik family left the familiar comforts and hassles of New York for the urbane glamour of Paris. For the next five years, the author filed his "Paris Journals" to the "New Yorker" and his sojourn traces a sentimental re-education in what it means to be an American in Paris.


I bought this book with the understanding it was Gopnik's memoirs of being an expatriate in Paris, raising his young son. I expected (and, I'll be honest, wanted) heavily romanticised paragraphs describing the beauty of the city, and lyrical prose on what it means to be a new Parisian. Having lived in Paris for a time, I enjoy reading of other's love for it, particularly those who, like myself, were new to the scene. Unfortunately, Gopnik did not deliver what I was expecting. His prose was dead set on describing the political events of the time, and the events leading up to them. Oh, yawn. I am not a political kind of girl; my eyes glaze over horrifically.

The 'story' is more of a clump of essays and journal entries Gopnik wrote whilst living in Paris. I say clump rather than collection as they did not flow together in any way that I could tell. There was no incentive to continue reading; I was loathe to pick it up, and the disjointedness was nothing but painful. I learned nothing. They lived in Paris for five years and told me absolutely nothing about the city. I lived there for eight months and could tell you a million things; I could tell you what it's like to lie on your back on the Champ de Mars drinking wine out of the bottle and gazing at the tower; I could tell you how it feels to do your first big shop in a French supermarché; I could tell you a thousand stories of weird and wonderful people I met only on Metro trains. Gopnik told me about worker's strikes, government nonsense, and current affairs (which, considering his soirée lasted from 1995 until 2000, is now ancient history) and barely anything of his Paris, which is really what I was looking for.

Please don't waste your time with this one; it went absolutely nowhere, and is entirely mediocre. I have better stories about Paris in my Hotmail sent box. High hopes, long fall. 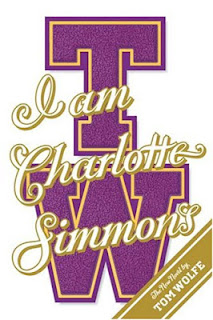 I Am Charlotte Simmons by Tom Wolfe

Dupont University - the Olympian halls of learning housing the cream of America's youth, the roseate Gothic spires and manicured lawns suffused with tradition- Or so it appears to beautiful, brilliant Charlotte Simmons, a sheltered freshman from Sparta, North Carolina, who has come here on a full scholarship.

But Charlotte soon learns that for the upper-crust coeds of Dupont, sex, Cool, and kegs trump academic achievement every time. As Charlotte encounters Dupont's elite - her roommate, Beverly, a fleshy, privileged Brahmin in lusty pursuit of lacrosse players; Jojo Johanssen, the only white starting player on Dupont's godlike basketball team; the Young Turk of Saint Ray fraternity, Hoyt Thorpe, whose heady sense of entitlement and social domination is clinched by his accidental brawl with a bodyguard for the governor of California; and Adam Gellin, one of the Millennium Mutants who run the university's 'independent' newspaper and who consider themselves the last bastion of intellectual endeavour on campus - she gains a new, revelatory sense of her own power, that of her difference and of her very innocence. But little does she realize that she will act as a catalyst in all of their lives.

I have never come away from a book feeling the way I do at the moment. I really enjoyed reading this, and I was never loathe to pick it up. It was easy to get into, and the plot carried me along nicely. However, I have finished the last page and I am sitting wondering what really was the point in all that? Almost seven hundred pages, and I have taken nothing from it. I feel as though I have wasted good reading time, which is strange because I enjoyed it for the duration. I really can't fathom my feelings.

Here is a novel which reads like a really bad (and I will use an Americanism to emphasise my point) movie. We are given our gorgeous, smart, naive girl embarking on a new adventure. She vows never to have her morals compromised, but soon bows to peer pressure, gets drunk and loses her virginity to an absolute dick of a frat boy. A desperate geek then falls in love with her, unrequitedly. Add a beefy jock into the equation, one who comes to embrace the power of the intellect, but only with our Charlotte's help, and we've got ourselves a teen movie. It reeked of She's All That.

Wolfe was in his seventies when this novel was published, and that impressed me when considering the subject matter. I am sure it could've been better written, and the characters could've been fleshed out to be a bit more believable, rather than static stereotypes, but for an old guy he has certainly captured the fear, the bitchiness, and the sheer devastation that comes with being an eighteen year old girl with the world on her shoulders (i.e. omg every1 on campus knows u lost it 2 hoyt thorpe). My main gripe is that it was almost seven hundred pages long - a behemoth of a book - and half of it was barely necessary. I am quite sure this could've been written using half the words, and with double the impact. I am a bit disappointed with how I feel now, considering I have put in quite a shift to finish the book in the first place.

I like that Wolfe is trying to critique the American university lifestyle. I liked his descriptions of the power struggles between groups. I liked his analysis of social codes in these types of environments. There is just something missing; he stumbles in places, misusing slang words, or misunderstanding certain areas of the lifestyle, and seems incredibly like Charlotte Simmons herself - a fish out of water.

The grand finale just embarrassed me. It seemed very rushed, very 'oh look, everything's okay now and Charlotte is one of the cool kids!' I expected a bit more than this, something a bit less predictable and more moralistic.

I didn't mean to completely trash this, and at the same time I didn’t mean to write such a mediocre review; this tends to happen with me, though, mediocre reviews for mediocre novels. I did enjoy it, but only in a casual way. I like novels that make me think in different ways, and impact on my life a little bit. This did neither, although I won't deny it certainly entertained me for a while. Please avoid.