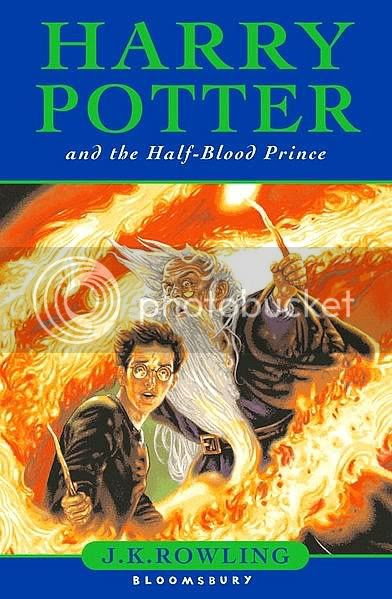 Harry Potter and the Half-Blood Prince by J.K. Rowling

'In a brief statement on Friday night, Minister for Magic Cornelius Fudge confirmed that He Who Must Not Be Named has returned to this country and is once more active. "It is with great regret that I must confirm that the wizard styling himself Lord - well, you know who I mean - is alive and among us again," said Fudge.'

I often wonder whether this installment is my favourite, rather than Goblet of Fire. I have never made up my mind. They are both two very different novels, but I think this one has climbed to the #1 spot this time.
It's just wonderful; anguish, heartache, adventure, mystery, love, family,BETRAYAL. I could go on and on.
The best thing about this novel is the insight we are given into Voldemort's past life. It is incredible to learn about him as a young boy, and how he became the most powerful Dark wizard of all. I loved learning of what made him tick, what sort of things he was attached to, how he used people, and how he used his power. And we saw all of this through the Pensieve. I have such a high opinion of this plot device; I could talk about its merits forever. I have never come across something so effective in conveying past events - it allows us to witness events first hand rather than through the jumbled words of someone else, and it allows us to witness them more than once if need be. I love it.
Of course the heartbreak comes in the final few chapters when we lose Professor Albus Dumbledore, the heart and soul of Hogwarts School of Witchcraft and Wizardry. It is an unbelievably emotional moment; a great loss. I believe the lament of the phoenix spoke for everyone at this point.
The novel ends and opens a wonderful, tantalising path for the final novel to go down, and although it doesn't end with a cliffhanger as such, it makes you desperate to read more, to make sure everyone will be okay, but with a dreadful feeling in your stomach because you know what's coming.
Time for Book 7.
Posted by JK at 16:54 No comments: 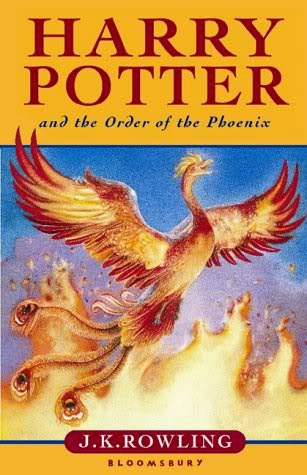 Harry Potter and the Order of the Phoenix by J.K. Rowling

Harry Potter is due to start his fifth year at Hogwarts School of Witchcraft and Wizadry. He is desperate to get back to school and find out why his friends Ron and Hermione have been so secretive all summer. However, what Harry is about to discover in his new year at Hogwarts will turn his whole world upside down. But before he even gets to school, Harry has an unexpected and frightening encounter with two Dementors, has to face a court hearing at the Ministry of Magic and has been escorted on a night-time broomstick ride to the secret headquarters of a mysterious group called 'The Order of the Phoenix'. And that is just the start.

I always hope my feelings for Order of the Phoenix will change with a re-read. It is my least favourite of the seven, and I can never quite put my finger on a specific reason as to why this might be. I have a few theories, however.The suspense of the first four novels isn't as apparent here. There is not so much incentive to read on, the mysteries involved aren't as tantalising, and there isn't as many new spells, objects or people to meet and discover as in the previous installments. These small nuances are quite important to me.Rowling's character development is quite bland. We don't learn a great deal about her characters which we didn't already know, and only the slightest of things seem to develop, such as the way Ron and Hermione act around each other. These things can only be noticed if you are already aware of what happens later in the saga, however.Harry is absolutely deplorable throughout the entire novel. I often wonder if Order of the Phoenix is my least favourite installment due to my intense dislike for his attitude in it. Rowling is trying to bring across his teenage angst and temperament, but he just comes across as completely abhorrent. I do not deny that being the Chosen One must be a bit on the stressful side, but all he did was piss and moan for 700-odd pages. He is nothing but rude and disrespectful to Ron and Hermione, who have with nothing but the best intentions. I felt so sorry for them. Not only this, but Harry's attitude towards Dumbledore in the penultimate chapter was nothing but foul. He is, quite simply, a horrible person in this novel.

I also have a great deal to say about the death of Sirius, however I've decided not to say a thing this time around.It's an enjoyable book, just not as much as the others. And at 700 or so pages, it's full of inconsequential nonsense which is quite entertaining, but which is completely irrelevant and could probably have been left out entirely.At least I know Half-Blood Prince will remedy all of this.
Posted by JK at 10:12 No comments: 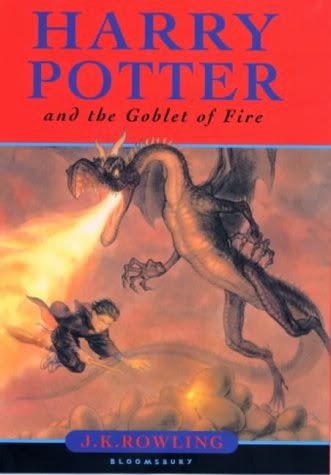 Harry Potter and the Goblet of Fire by J.K. Rowling

Once returned to Hogwarts after his summer holiday with the dreadful Dursleys and an extraordinary outing to the Quidditch World Cup, the 14-year-old Harry and his fellow pupils are enraptured by the promise of the Triwizard Tournament: an ancient, ritualistic tournament that brings Hogwarts together with two other schools of wizardry--Durmstrang and Beauxbatons--in heated competition. But when Harry's name is pulled from the Goblet of Fire, and he is chosen to champion Hogwarts in the tournament, the trouble really begins.

My favourite of the seven!
The plot thickens! This is quite a hefty tome - 637 pages to be exact - and I think this is testament to how complex the plot is becoming. Rowling is aware her readers are growing up, so she weaves layers and layers of plot into this novel to make it as intricate and exciting as she possibly can. I think the entire plot in this installment is wonderful.
The Triwizard tournament is my main reason for loving this one. I loved meeting wizards from other countries and learning of their cultures, and different ways of life. There were different spells, objects, creatures and places to learn about during the tournament. We are even allowed a peek into the Prefects' bathroom!
Rowling's character development is lovely. I really love seeing Harry, Ron and Hermione grow up. In this installment, Rowling gives them all exactly the same teenage stresses that we all go through, and it's refreshing to see. I particularly enjoy Harry's "Wangoballwime?" invitation to Cho.
Barty Crouch Jr. is a character who has always intrigued me. I hate him so much that I almost love him in an odd way. The chapterVeritaserum in which he tells his story is one of my favourites in the book. It's just so fascinating; the things he did were deplorable. I find it a shame that the kiss was performed on him - he could've done some wonderfully awful things later on in the saga.
I love reading the series back to back. But, as always, I never want to begin reading Order of the Phoenix because it's almost like the beginning of the end. Here I go!
Posted by JK at 10:07 No comments: