Letter From a Desperate Father by Maron Anrow

An innocent man has been imprisoned. Hoping to see his son one last time, he composes a letter explaining the devastating event for which he's been blamed.

I read Maron Anrow's Laika in Lisan last year and adored it, so I was delighted when she asked me to read her new short story.

The story comes in the format of a letter, written by a man arrested for attempted murder. Although the above description of the novel describes him as innocent, this is something which can be interpreted widely, and I particularly enjoyed coming to terms with his crime in my own mind.

I had expected the letter to be addressed to the man's son, however instead it seeks the aid and understanding of an unnamed police official. The man simply wants to see his son again, and the further we delve into the story, the reason for this becomes strange, tangled, and paranormal. I had no anticipation of there being supernatural elements in the story, and this is always a welcome feature in any book.

Anrow's narrative is impressive, flowing beautifully and adding suspense with perfection. Her ability to build such full, interesting characters in such a short number of pages, is something to be awed. I loved that many things were left to the reader to interpret and comprehend. The deep personal level of the letter allowed me to sympathise and trust the narrator, however it's only after I finished the story I realised there's a chance I couldn't trust him at all.

Truly wonderful, as I only could have imagined from Anrow. My only criticism is that I want much more; I want to know what happens to the narrator, I want to find out where his wife was from and more about her associations with magic, I want to know if his crime was worthwhile, I want to know the fate of his son and his capability for forgiveness. Maybe I'm greedy, I just wanted this story to go on far longer than it did.

I'd completely recommend picking this up; it takes around fifteen minutes to read, but will stay with you far longer.
Posted by JK at 20:04 No comments:

I Let You Go by Clare Mackintosh

In a split second, Jenna Gray's world is shattered. Her only hope of moving on is to walk away from everything she knows to start afresh. Desperate to escape her past, Jenna moves to a remote cottage on the Welsh coast, but she is haunted by her fears, her grief and her memories of the cruel November night that changed her life for ever.
DI Ray Stevens is tasked with seeking justice for a mother who is living every parent's worst nightmare. Determined to get to the bottom of the case, it begins to consume him as he puts both his professional and personal life on the line.
As Ray and his team seek to uncover the truth, Jenna, slowly, begins to glimpse the potential for happiness in her future. But her past is about to catch up with her, and the consequences will be devastating.

I like to think of myself as a clever little cookie when it comes to psychological thrillers. More often than not, I've worked it all out before long, and read through the rest of the novel simply to see if I'm right; I usually am. I Let You Go left me utterly captivated, confused, and out of my depth. I had thought I'd known what was going into happen until Mackintosh sent the entire plot spinning around my ears with the twist of the year. I was comfortable with the plot, and the shift in perspective hit me like a punch. I'd only just recovered enough before she smacked me with another one.

This is one of those novels which will be incredibly difficult to review without giving anything away. It's very cleverly written, with a perfect pace. Mackintosh had me entirely under her spell; sickened and lovestruck in all the right places. There are some very uncomfortable scenes which evoke the reader's feelings amazingly well, but which might be potential triggers for those familiar with abuse; I'm not sure I'd recommend it in certain situations for those reasons.

The narrative shifts each chapter from Jenna's perspective to that of the police team investigating the incident. I really love this type of style as it gives a great rounded view of the situation. I felt Jenna was more developed, however, and some of the characters involved in the police side of things were left with loose ends in the finale. I did like them, though, and would have appreciated some more backstory. Mackintosh may use them in another novel, or perhaps work them into a series, and if that was the case, I'd definitely read it.

Utterly addictive, powerful, and impossible to stop reading; if you liked The Girl on the Train, this is better. Mackintosh has done her research, and I absolutely cannot fault her. Please pick this up if you're looking for something to get your heart pumping.
Posted by JK at 17:22 No comments: 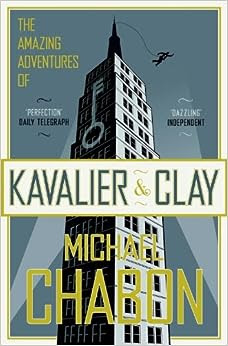 The Amazing Adventures of Kavalier & Clay by Michael Chabon

Joe Kavalier, a young Jewish artist who has also been trained in the art of Houdini-esque escape, has just smuggled himself out of Nazi-invaded Prague and landed in New York City. His Brooklyn cousin Sammy Clay is looking for a partner to create heroes, stories, and art for the latest novelty to hit America - the comic book. Drawing on their own fears and dreams, Kavalier and Clay create the Escapist, the Monitor, and Luna Moth, inspired by the beautiful Rosa Saks, who will become linked by powerful ties to both men.

This is a 600-page tome comprised of beautiful sentences. Chabon's lyrical prose does wonders to build a passage up to something magical. He makes simple gestures or objects sound like artefacts from a whimsical magic show. This is all wonderful for the first half of the novel, and I found myself getting lost in his words. After this point, however, I soon realised their grandeur was only affecting the length of the novel, and having no real impact on the plot. This realisation was like emerging from a gorgeous dream, only to understand you're back in the mundane. It was like noticing how loudly your colleague chews at the lunch table, and being unable from that moment on to notice anything else.

I have a real love of reading about the second world war, particularly from the Jewish perspective. Seeing Joe's escape from Prague, his heart-wrenching farewells to his family, and his subsequent endless battle to allow them to join him in New York, was devastating. His love of magic tricks and Houdini endeared him to me, and I truly loved him as a character. I would have much preferred to spend longer in Prague and learn more of their cultural struggles at this time; much of this was glossed over, and Joe escaped his country fairly quickly, leaving me slightly remorseful. I'd have also liked to see his adaptation to American culture; he seemed to slot in nicely, apart from maybe using a couple of colloquialisms in the wrong context. I'm sure at a time of such religious tension, this wouldn't have been so simple.

It's clear Chabon is a huge comic book fan, and his commentary on the industry in its Golden Age was valuable. To see Kavalier and Clay get totally ripped off by their publishers, as I imagine many did, was heartbreaking, and this was only after seeing the blood that went into the creation of their stories and characters. Their brainstorming ran parallel to the rise of Batman and Superman, and I particularly enjoyed their thought process for the Escapist, and how he could differ from the other main players; the vein of this being Why?. Many don't realise the why is the most important aspect of any plot or character, and I was delighted to see them think through this, and finally come up with the perfect why for their Escapist.

After Joe's feeling from Prague, the creation of the Escapist, and his falling in love with Rosa Saks, the entire novel fell on its face for me. I found it difficult to motivate myself to pick it up, and struggled to understand why this was; I'd been so in love with the plot up until now - why was I so bored? After truly thinking on this, I understand now that Chabon had set up so many huge themes without truly getting into the skeleton of them. The war, the holocaust, homosexuality, and all of the difficulties these things carried in those times, were raised to our attention in the first half, then entirely neglected in the second in favour of gorgeous, yet pointless, sentences. This was a real shame, as it meant I fell out of love with the characters, and out of interest in their fate.

In the end, everything was tied up with a nice shiny bow, however as is apparent in most comic books, the fate of the sidekick remained foggy, despite being the last thread I was truly interested in. I'm glad I experienced the novel, however at 600 pages, I'd have expected something far more epic.
Posted by JK at 15:53 No comments: