Every weekend, in basements and parking lots across the country, young men with good white-collar jobs and absent fathers take off their shoes and shirts and fight each other barehanded for as long as they have to. Then they go back to those jobs with blackened eyes and loosened teeth and the sense that they can handle anything. Fight Club is the invention of Tyler Durden, projectionist, waiter and dark, anarchic genius. And it's only the beginning of his plans for revenge on a world where cancer support groups have the corner on human warmth.

This review should just read you don't talk about fight club to save everyone some time. I have resolved to press on with my somewhat disappointed commentary.

The novel epitomises everything that is wrong with book to film adaptations. I couldn't read it without imagining Edward Norton, Brad Pitt, and Helena Bonham-Carter as the characters, or comparing the scenes in the film to what I was reading at the time. There were some absolutely excellent, hard-hitting moments in the book which (and doesn't this always happen?) weren't translated to the big screen. Worst of all, Hollywood changed the finale; Palahniuk penned a perfect ending to this novel, which underlined the fact our narrator wasn't now able to do what he truly wanted because of Tyler Durden and Project Mayhem. Despite these good points, I'm tempted to suggest the film was better than the book.

I found the prose to be completely monotone in style, and less than engaging. I realise the choppy repetition was deliberate to convey our narrator's tired and apathetic world view, however it irked me very quickly and did nothing to make me want to read on. I'm sure I skimmed more pages than I should have. Palahniuk did the characters no favours; the only one who was presented as a wholly rounded person was Marla, who was a lot smarter and sassier than the cliched goth in the film would have you believe. The narrator and Tyler were completely two-dimensional, and my love for Big Bob wasn't the same on paper.

Palahniuk's comments on consumerism and masculinity are ones to think about here. In order to cope with their growing disillusion towards their small jobs and (supposedly) meaningless lives, these guys meet up once a week to beat the crap out of each other. When this ends up feeling less than enough, the clubs evolve into Project Mayhem, an anarchist movement hellbent on destruction. Does that sound masculine enough for you? These men are searching for something meaningful in our materialistic consumer-led society, and the only way they can manage to do so is through sheer violence and organised chaos. If violence was the answer here, then why was the only unwritten rule of fight club 9th Rule: No women allowed?

Yes, I understand the message Palahniuk is trying to convey here, but I just can't get on board with it. I can feel the tension in working in a job you hate, to buy pretty crap you don't need because the media has told you to do so. Yes, I want to find something a bit more enlightening to do with my life. No, I'm not happy in the system. YES I have had days where I've wanted to slam my fist into someone's jaw. But let me put this to you: could another, more articulate, author have spurred my attention and motivation more effectively? Absolutely.

I've read a number of Palahniuk books now, and I'm still not on board with the cult craze he profits from. You can say I'm too old and cynical, or you can say I just don't get it. I think it's purely because I've experienced much more talent in other types of work. He only presents to me a numb sort of reading experience, and I read to the final page out of grim resolve rather than enjoyment.

I am Jenna's lack of enthusiasm. 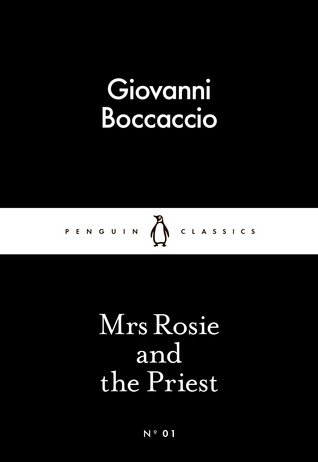 Mrs Rosie and the Priest by Giovanni Boccaccio

This is the first novel in the Little Black Classic series by Penguin; a very exciting and promising collection, so exciting and promising, in fact, that I felt the need to buy all eighty of them. I plan to read them alongside my current reading list, so as not to make any books feel left out.

Having heard many things of Boccaccio, but never actually read him, it was great to have him as the first author of this collection. The book was comprised of four short stories, all of which featured strong, intelligent, and seductive women. The stories feel timeless in the way they were written, and I could almost have been fooled Boccaccio was a modern writer. This, of course, could be down to the translation, but the stories seemed terribly contemporary despite being written in the fourteenth century, particularly with the women enjoying sex as much as men (with some hilarious dancing around this taboo subject from the author).

It was interesting to see the lives of those in this era, with some disturbing emotional abuse occurring in the final story. The sheer power perversion bothered me, but has to be written off as a product of that time in history.

So here lies the proof; fourteenth century literature can be cheeky as hell. An excellent choice for the first book in what is looking to be a wonderful collection.
Posted by JK at 22:02 No comments: 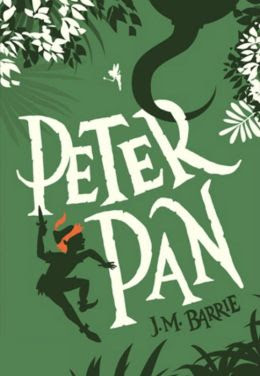 Wendy, Michael and John are sleeping when the window of their nursery blows open and lets in a very remarkable boy, Peter Pan, and his fairy, Tinker Bell. Peter soon entices the three children from their beds and out through the window to Neverland. There, they encounter mermaids, fairies, the Lost Boys, the Indian princess Tiger Lily and her tribe, and do battle with an villainous gang of pirates and the sinister Captain Hook.

Peter Pan is a story we're all familiar with; the boy who never grew up. It's a heartwarming adventure story for children, with Wendy, John, and Michael being uplifted from their beds and flown to Neverland to battle pirates, redskins, and a ticking crocodile.


The novel is really nothing like its Disney interpretation. Peter is a cocky wee shit rather than a profound philosopher, doing whatever he can to maintain his hold over the children and the lost boys. This usually comes in the form of emotional abuse or gaslighting. Barrie almost seems to imply that children are heartless, selfish and cruel, at the same time hinting that every child needs a mother. If Pan hadn't lost his mother, and hadn't been given free reign of Neverland, would his traits be the same? He decides he and the lost boys need a mother, so kidnaps Wendy from her bed to become mother to them all. He does this knowing that in doing so, Wendy, John, and Michael will lose their own mother.


Wendy doesn't come across well either (although I've never liked her), by encouraging Pan's behaviour, and by the time she grows up allows her children and grandchildren to fly to Neverland to do Peter's spring cleaning! She remembers fondly the time she was kidnapped by pirates, or marooned and left to die on a rock in the middle of the lagoon, and sends her offspring off to their potential deaths. Well in, Wendy, you plum.


Adults can appreciate adventure too, but reading this as an older person (never an adult), I could see Barrie's depiction of the Darling parents' pain over the loss of their children. Mrs Darling never closing the window, and Mr Darling resolving to live in Nana's kennel until the children return. Barrie wrote the novel as testament to his older brother who died the day before his fourteenth birthday; the real boy who never grew up. It's plain to see Barrie show us his own mother's pain through Mrs Darling, and it's a real heartbreaker to read of the lost boys missing their mother whilst she is missing them.


Despite Peter Pan's darker themes, there is something really magical about this book. I'm sure we'd all, at some point, like to open our windows and fly off into the night, ending up in a new world.
Posted by JK at 15:09 No comments: