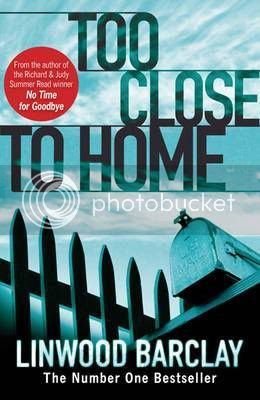 Too Close to Home by Linwood Barclay

When the Cutter family's next-door-neighbours, the Langleys, are gunned down in their house one hot August night, the Cutters' world is turned upside down. That violent death should have come so close to them is shocking enough in suburban Promise Falls, but at least the Cutters can console themselves with the thought that lightning is unlikely to strike twice in the same place. Unless, of course, the killers went to the wrong house... At first the idea seems crazy - but each of the Cutter family has a secret they'd rather keep buried. What was on that old computer teenage Derek and his friend Adam Langley had salvaged? And where is it now? What hold does a local professor and bestselling author have on Ellen Cutter? And what does Jim Cutter know about Mrs Langley that even her husband didn't? To find out who killed the Langleys and why, everybody's secrets are going to have to come out. But the final secret - the secret that could save them or destroy them - is in the one place nobody would ever think of looking...

I really love easy to read, fast-paced suspense novels like this. They give me a nice break from some of the harder novels I try to get through, and I like the sense of satisfaction I get in the end once everything has been unravelled. I like to guess at the mysteries, and I’ve read so many of these kinds of books that I’m normally correct, but this time I was surprised - I was only right half of the time! (This is quite the killer for someone who prides herself on always being right!)

Some of the characters were, I felt, extremely well developed. I felt myself identifying and sympathising with the most evil of characters, even the killer! I liked how Barclay portrayed Derek, the narrator’s seventeen year old son. Sometimes I feel that writers tend to try too hard when depicting young people - they come across as forced, the author’s trying to be ‘hip’, and it rarely works – but I feel this time it worked incredibly well. Derek behaved exactly how a teenager should. However, I felt certain characters were quite dull, most of all the narrator, Jim. Whenever something happened that he didn’t like, he’d punch someone, or act aggressively. That seemed to be his only answer to a variety of problems, and it just seemed a bit superficial and almost puerile. His wife, Ellen, also seemed a bit dull and underdeveloped to me. I had no idea who she was.

The novel was written in first person, from Jim’s point of view. I couldn’t help but think that it may have worked a lot better in third person. There were so many different stories from different people tangling together that I thought there might be more suspense should it have been written in third person, or if there had been narratives from various viewpoints, rather than just Jim Cutter’s.

Another thing I didn’t particularly like was that half of the plot was given away by the blurb on the back cover. Not only this, but Jim’s wife’s name was ‘Eileen’ on the back cover, and ‘Ellen’ in the book. Oh dear!

It was very engaging, and I’d recommend it to anyone who’s looking for a casual read that doesn’t require too much effort from the reader. I’m perhaps a bit out of season, but I think it’d make the perfect holiday novel. 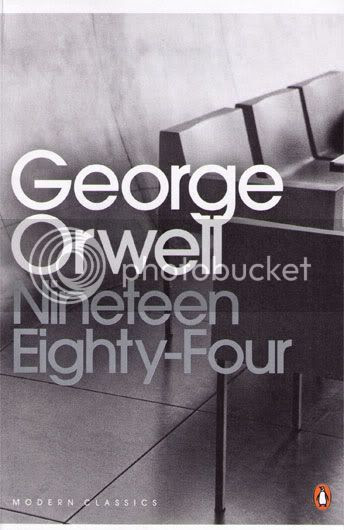 Thought Police. Big Brother. Orwellian. These words have entered our vocabulary because of George Orwell's classic dystopian novel, 1984. The story of one man's nightmare odyssey as he pursues a forbidden love affair through a world ruled by warring states and a power structure that controls not only information but also individual thought and memories.

This book terrifies me, and always has done.

Orwell gives light to a totalitarian regime in a dystopian world that makes the likes of Hitler and Stalin look like pussies. Everything is controlled by the government - working, eating, talking - and even the most minor unorthodox thought can be detected through a variety of different technologies or groups.

What scared me most about this novel is the idea that the past does not exist. All evidence we have of the past exists in only written records and memories. What if these are false? What if both of these can be controlled?

Although 1984 has now been and gone (I wasn't even a figment of imagination at this time), it is hard to believe that this novel was first published in 1949 as a projection of the future. Although there are clear nods to Stalinist Russia, anyone reading the book now could quite easily find stark parallels to life as we know it today, and I believe even ten, or twenty years on, this may still be the case. It's essentially about propaganda, how this affects society, and how powerful it can be when put to use by government.

The ending was quite surreal, although I feel this was intended due to our protagonist's experiences.

It's absolutely timeless, and will no doubt remain a classic for an incredibly long time. It's so influential, not to mention important, and I feel as technology rapidly progresses it's a novel that will become more real year after year.

I'd encourage people to read this, or even to re-read it. I read it when I was in school and after reading it again I've gained a much different perspective than I did years ago. It's quite the cultural point of reference, and along with Animal Farm, is a good place to begin your Orwellian experience. 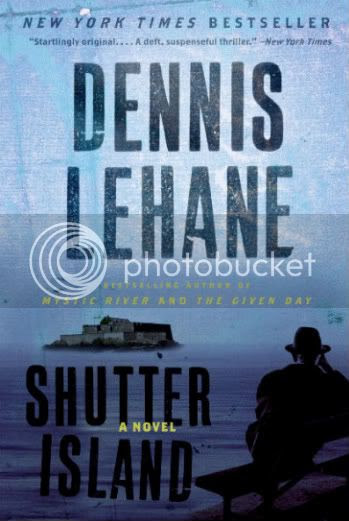 Summer, 1954. U.S. Marshal Teddy Daniels has come to Shutter Island, home of Ashecliffe Hospital for the Criminally Insane. Along with his partner, Chuck Aule, he sets out to find an escaped patient, a murderess named Rachel Solando, as a hurricane bears down upon them. But nothing at Ashecliffe Hospital is what it seems. And neither is Teddy Daniels.

This is going to be extremely hard to review without giving anything away.

Firstly, the story has a really good pace and flow, which is quite essential in mystery novels such as these. To coin an overly-used book reviewer's phrase, it was certainly a page-turner.

The book was so interesting in the sense that you never really knew who to trust, and nothing was quite as it seemed. The story kept twisting around and throwing out complete wildcards so that there's never really any certainty of what's happening, or who is being genuine. Most scenes can be construed from two different angles; it would have been nice to read this once, find out the twist, and read it again from the other perspective had I not already known all the secrets from seeing the film.

I really enjoyed the idea that when someone is proclaimed as insane, all of their protestations to the contrary will only add to the argument against them.

Lehane slowly gives out clues to what's really happening on Shutter Island, but many don't make sense until the end. It becomes quite cluttered and chaotic in places, and at times incredibly confusing, but I think that's a nod to how the insane human mind must be.

The characterisation was also really, really good. I'd like to delve a bit more into this, but there wouldn't be much to say without dishing out lots of spoilers, so I shall refrain.

The twist is delicious. I'm a sucker for a good mindbend, and this didn't disappoint. It may be one you see coming, but it does leave you reeling nonetheless. It's one that's weaved in perfectly through the entire novel, and makes a lot of sense once you think back.

I really would recommend this to anyone with an open mind who likes mystery novels and suspense. It's one that will keep you on your toes throughout, and keep you thinking long after you've reached the last page.