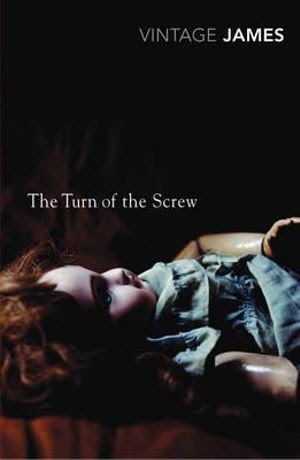 The Turn of the Screw by Henry James

When an inexperienced governess goes to work at Bly, a country house in Essex to look after a young boy Miles and his sister Flora, all manner of strange events begin to occur. The governess spots a ghostly man and woman around the grounds and is told by the housekeeper that the valet and previous governess haunt the house. It soon becomes clear that the children are inexplicably connected to these ghosts in some way and the young governess struggles to protect the children, although from exactly what, she is not sure.

This is such a strange little novella that I'm unsure how to begin.

The story is given to us by someone who had heard the story from someone else, who had been told the story directly from the governess herself. From the beginning, therefore, we are steeped in the issue of narrator reliability. Did all this really happen? And did it happen exactly as we are told? The ending is entirely ambiguous, and we are left on our own to think over what's happened. James leaves us to decide the whys and wherefores, without spelling anything out, which I liked.

I felt cold and detached throughout the entire story; I couldn't warm to any of the characters, and the narration confused me, as though I were dreaming. There are so many layers here that I couldn't decide whether this was a ghost story, or a psychological study. Were the ghosts real? Or was the governess just batshit insane? Her wordy, flowery narrative, her racing thoughts, her fickleness, and the mere fact that she seemed to be the only one ever to see the spectres, certainly suggested she was off her rocker.

James has written the entire story using the bare minimum of full stops. His use of punctuation is admirable, particularly the sentence which had six commas and seven semi-colons, but is incredibly difficult to read. I often had to read a sentence two or three times to ensure I was fully aware of what was going on. This erratic style, however, did add to the idea that the governess was falling into mental breakdown.

This is a short little read, but worthwhile. It's in no way frightening, but experiencing the doubtful and cryptic mind of the governess is definitely a must for classic lovers.
Posted by JK at 14:25 No comments: 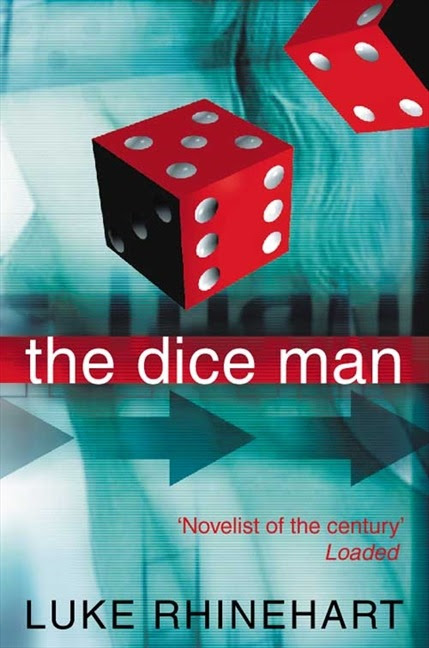 The Dice Man by Luke Rhinehart

Let the dice decide!
This is the philosophy that changes the life of bored psychiatrist Luke Rhinehart – and in some ways changes the world as well. Because once you hand over your life to the dice, anything can happen.

This book is apparently a cult classic, which is why I picked it up. The story follows our narrator, Luke Rhinehart, a psychotherapist who is depressed and bored with his life. In a fit of something or other, he decides to make his life's decisions by gambling, and letting the dice decide the answers for him. He then turns this way of life into a cult, causing many others to throw their control of life over to chance. This is a very interesting idea, but George Cockcroft (the author without the pseudonym) managed to bore me to tears.

Luke Rhinehart is an abhorrent character. His innermost thoughts are ridiculous, his actions completely immoral, and his justification of all he does is pathetic. He assigns six options to the die, and then rolls to see which course of action he should take. The options he assigns are mostly destructive, such as murder or rape, and the novel hugely trivialises these as though the options were making a cup of tea or washing your hands.

There was something that annoyed me, not only about the main character, but about the plot itself. There was a lot of misogyny, a lot of pompous descriptions, and a lot of disappointment. It may be the worst book I have read for failing to put the superiority of an idea across simply due to poor writing skills.

I can't write any more of my thoughts on the novel as I feel I have spent far too much time on it already. I imagine I may have enjoyed this more had I been a lecherous man in the midst of a mid-life crisis in the 70s. This is somewhat doubtful, however.
Posted by JK at 14:57 1 comment:

When Lennart Cederström found the baby girl lying in a plastic bag, she was close to death. As he gave her the kiss of life, her responding breath was a perfect musical note. In that instant, she became his obsession. He could do nothing but take her home. But this little star is nothing short of a nightmare.

Having read Let the Right One In by this author, I had very high hopes for Little Star. With the former novel, Lindqvist took the age old vampire novel and made it even darker, and more disturbing than not only certain vampire romance novels we could mention, but also the genre as a whole.

The plot started off incredibly well. The mystery of the baby girl, Theres, who was found in the woods, was a huge one, and her strange musical abilities were curious to say the least. I was interested to learn of the child's progression through life, and of the strange incidents that occurred as this happened. After one particularly shocking incident, we are transported from this girl's life to that of another, more normal girl, Theresa. She was full of the typical types of angst young teenage girls experience, and as a result she was a complete and utter dullard. I think Lindqvist was attempting here to contrast the lives of the girls, one having a fairly typical upbringing and one not, but Theresa is bullied for being overweight, and so turns into a psychopath. Please.

I felt as though Lindqvist had spent all his energy on developing the first strange girl, and so had no drive left to give us a really interesting second crazy lady. A number of other girls are brought into the mix, forming a wolf pack, and none of them had particularly meaty backstories. This was such a shame, because by the time the girls turned savage, I had completely disengaged and was entirely unaffected by lyrical bouts of bloody violence.

What I particularly liked about Let the Right One In, was the sheer extrinsic atmosphere I felt reading a supernatural novel set in a Scandinavian country. It felt darker somehow, foreign and frightening. This was only present in the beginning of Little Star, and was effective until I started to notice English colloquialisms creep into both the narrative and dialogue. Although this was no doubt down to the translator, and not Lindqvist himself, reading of young Swedish girls smoking 'fags' and saying, 'bloody hell' just didn't ring true with me. I was half expecting Ron Weasley to jump out of a Ford Anglia.

I'm not one to become irritated if a novel doesn't reveal everything by its finale. In fact, I quite often respect an author for leaving an open ending, and allowing us as readers to make our own decisions about what we've read. Lindqvist leaves out an important factor here; the origin of Theres. The novel begins as though someone has tried desperately to get rid of her, and this piqued my curiosity originally. Her foundations are never referred to again, and I feel this would have added to the plot significantly. I realise Lindqvist's intent was to leave a chilling question mark over the girl's ancestry, but this didn't work for me.

Although this had, without a doubt, a very promising beginning, it falls flat pretty quickly. I feel as though I have no idea what Lindqvist was trying to achieve, and also feel that perhaps he had no idea either. I wouldn't describe this as a horror novel, and wouldn't encourage you to think of it as such.
Posted by JK at 17:33 No comments: 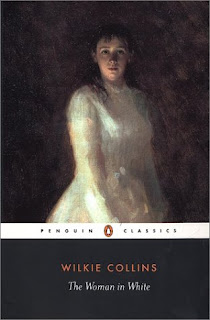 The Woman in White by Wilkie Collins

The Woman in White famously opens with Walter Hartright's eerie encounter on a moonlit London road. Engaged as a drawing master to the beautiful Laura Fairlie, Walter becomes embroiled in the sinister intrigues of Sir Percival Glyde and his 'charming' friend Count Fosco, who has a taste for white mice, vanilla bonbons, and poison. Pursuing questions of identity and insanity along the paths and corridors of English country houses and the madhouse, The Woman in White is the first and most influential of the Victorian genre that combined Gothic horror with pyschological realism.


I loved this little classic. It's a wonderful novel filled with intrigue and intricacies. I must admit I was slightly disappointed to begin with, as I expected this to be a creepy novel. For some reason, I had thought the woman in white would be some sort of spectre, and was incredibly disenchanted when I realised she was living and breathing. This is more of a mystery novel than a horror; not to be confused with The Woman in Black.

I usually struggle to empathise with female characters in classic novels. Although I realise the social constraints of the time allowed them to do little more than sit about until one of the males wanted a wee tune on the piano, I just cannot accept this at all. I hated Laura most of all for how pathetic she was, how other characters decided to keep things from her in case she fainted or started crying, and  how she had to keep the smelling salts no more than an arm's length away in case she was startled by a noise; she was just so disgustingly feminine that I loathed her entirely.

Collins compensates entirely for Laura's uselessness with the characterisation of her half-sister, Marion Halcombe. For a woman in the 1850s, she's a bit of a maverick, and possibly one of the best classic women I've ever experienced. Although she is aware of the social expectations of her, describing herself as only a woman, with all the weaknesses associated with womanhood, she says these things in such a cutting, sarcastic way, that it really hits a nerve. Marion realises over the course of the novel that she is in a desperate situation, takes it all into her own hands, and emerges victorious. Bitches get shit done.


I loved Collins' use of different characters in the narration of the novel. I particularly enjoyed one character interrupting another's narrative to say, "hello, I have stolen this journal, and this is what I think about the entries, thank you very much." This allows Collins not only to show us the story from different angles, but also to present to us the notion of an unreliable narrator; at least more than one of these were untrustworthy at some point during the novel. Once the realisation hits that you may not be hearing the truth, you start to distrust the narratives you trusted previously.

The first two thirds of the book were wonderful, and I really enjoyed finding out the mysteries of the conspiracy, and the reasons behind the strange goings on. After this point, Walter Hartright picks up the narrative again, and it all becomes quite dull. We know what's happened, and Walter is going about trying to prove it all. His narrative is incredibly dull compared to good old Marion's journal entries, and everything falls into place a bit too conveniently for my liking.

This is an absolute must for classic lovers and mystery lovers alike. It delves into so many different avenues of fascination that it's almost impossible to leave the characters behind and go on with your daily life. I plan to read another Collins novel, The Moonstone, in the near future.
Posted by JK at 19:24 No comments: