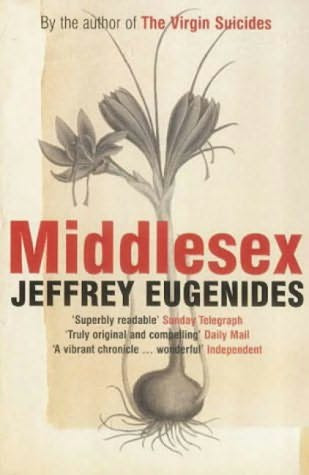 "I was born twice: first, as a baby girl, on a remarkably smogless Detroit day of January 1960; and then again, as a teenage boy, in an emergency room near Petoskey, Michigan, in August of l974. . . My birth certificate lists my name as Calliope Helen Stephanides. My most recent driver’s license...records my first name simply as Cal."

So begins the breathtaking story of Calliope Stephanides and three generations of the Greek-American Stephanides family who travel from a tiny village overlooking Mount Olympus in Asia Minor to Prohibition-era Detroit, witnessing its glory days as the Motor City, and the race riots of l967, before they move out to the tree-lined streets of suburban Grosse Pointe, Michigan. To understand why Calliope is not like other girls, she has to uncover a guilty family secret and the astonishing genetic history that turns Callie into Cal, one of the most audacious and wondrous narrators in contemporary fiction.

I'd like to begin by noting that it took me almost two weeks to read this book, which must be some sort of record for me. It was quite epic.

It's essentially about the narrator being a hermaphrodite, and this sounds freakish to begin with, but it is actually a lot more than that. It traces Cal's family over almost an entire decade, beginning in Greece and Turkey and ending in Detroit years later.

Cal is lovely as a narrator. His honesty seeps out of every word, endearing us to him almost immediately. The things he confides in us - the family secrets, the innermost thoughts of each character - each of these draw him into us emotionally as though he's an old friend.

I can't remember ever reading something so heavily detailed. The intricacy of Eugenides led me almost into not just imagining, but tasting and smelling the story too. It's beautiful in this way, but there is also beauty in the novel's rawness. There are tragedies, but with these come hope too.

The amount of research that must have been put into this tome is overwhelming. Eugenides uses medical jargon, ancient Greek, mythology and political, social and historical events to reel readers into his world. It really is incredible.

It's definitely a slow burner, but in this case I find it incredibly appropriate. It's almost like a saga; the characters are people you know and love. It feels like it lasts a lifetime, and in many instances, it does.

I'd love to recommend this to people if I didn't think they'd give up on it. Please, please, pick it up and persevere, it really is a masterpiece.

Agreed! It took me a long time to get into this one, especially since I'd just re-read The Virgin Suicides and it is a lot different than its predecessor. Definitely well worth the perseverance, though. By the time I was nearing the back cover I didn't want it to end.