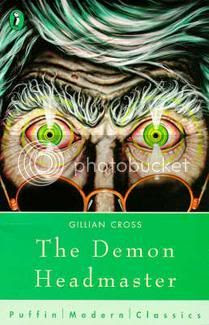 The Demon Headmaster by Gillian Cross

Dinah moves in with the Hunter family and starts going to the same school as her foster-brothers Lloyd and harvey. It's not easy, as they seem to hate her, and school is really strange. Pupils suddenly talk like robots and do weird things - even Dinah finds herself acting oddly. She's sure the headmaster has some kind of power over them, and is determined to find out more. But the Demon Headmaster is equally determined to stop her.

I loved this book when I was younger, and I especially loved the television series. Who could forget those horrible green eyes of doom? Yuck.

Despite this long lost love, I'm not too sure if this book is a good one for adults to return to. I remember finding it so exciting in my younger days, but reading it this time, I felt a bit depressed! I didn't feel a great deal of suspense as I read; there definitely should have been some there. I didn't have much feeling for the characters either; no love for the goodies and no hate for the baddies. It was all a bit bland.

The whole premise of the book is a terrifying one, and very reminiscent of Nineteen Eighty-Four (which is in fact mentioned in the book twice, but not as a comparison to events). The idea of a school such as this, with this kind of man in power is quite lamentable. However, (and I will ignore for the moment the fact that this is a book aimed at children) Cross shows us this scenario to be just a wee bit of a stress and a burden. No big deal, just a minor annoyance. This will probably pass over younger reader's heads, but it bothered me. I was particularly shocked by the snowball punishment. It was very cruel. The three characters who endured it seemed to be quite fine afterwards, but I was chilled to the core along with them.

Cross used the word "realer" in this novel, and my eyes crossed in frustration reading this horrible error. My particular copy was published in 1998, so I can only hope later editions have this mistake amended. It was awful.

Although more could've been done with the plot and the characters, it will always be a childhood favourite of mine. I'm moving on now to the sequel, which I seem to remember I enjoyed a bit more!