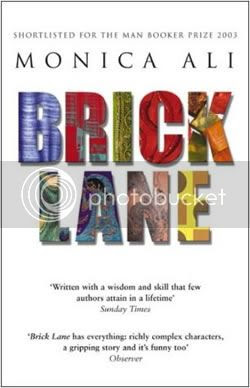 Still in her teenage years, Nazneen finds herself in an arranged marriage with a disappointed man who is twenty years older. Away from the mud and heat of her Bangladeshi village, home is now a cramped flat in a high-rise block in London's East End. Nazneen knows not a word of English, and is forced to depend on her husband. But unlike him she is practical and wise, and befriends a fellow Asian girl Razia, who helps her understand the strange ways of her adopted new British home.

Yet another novel I had high expectations of and have come away from underwhelmed and confused. I did enjoy the story, and I feel like I learned a lot about culture, however the plot was very weak, and I didn't fall in love with any characters. Falling in love with at least one character per novel is a requirement for me.

Nazneen, our protagonist, is as emotionless as they come. She wanders through her life as though she is practically brain dead, and even when the most emotionally gripping things happen to her she remains stoic. I couldn't fathom her out. She begins an adulterous relationship with a younger man and her feelings for him are described, but they are somehow metallic and meaningless. She is a still life painting; a hologram of life. I originally thought that she was portrayed like this to embody the oppressed nature of a Muslim wife, but this isn't the case. There are other Muslim wives in the novel who have so much more character. Towards the end of the novel, Nazneen begins to stand up for what she believes in, but even this just seemed alien and downright odd. I couldn't stop imagining her walking around with a perpetual poker face, regardless of the situation she found herself in.

I would have liked more from Nazneen based on the fact that she was uprooted from her home in Goripur and taken to London where everything is different. Other than a fleeting scene involving her bursting into tears over a bowl of cornflakes on the flight over, there was nothing in the vein of trying to fit in. I enjoyed Nazneen's memories from Goripur and really immersed myself into these. The difference in culture is so lovely to read, especially when there's jinns, talking birds, and exorcisms involved. I just wanted a bit more, a bit of comparison and contrast in Nazneen's blank canvas of a brain.

I particularly liked the letters Nazneen's sister sent to London from Dhaka. These were full of life, emotion and wonder. Hasina's life was far from perfect and she was not without her problems, but her letters oozed soul. I did have a problem, however, with the way these letters were written. Ali had Hasina write in broken English, and I couldn't understand why. Surely Hasina would not be writing to her sister in English? They both spoke Bengali, so I wasn't sure whether Ali was implying that Hasina was poorly educated or whether these letters had been translated into English by Nazneen. Neither of these outcomes make sense, and the thought irks me - are we to be looking down on Hasina?

The poltics and racial issues here are themes I was really looking forward to getting my teeth into, and learning from. I just couldn't. The planned marches, the riots, the looting, the fights; all of these just passed me quietly and they shouldn't have done. They didn’t make sense to me, and were poorly explained.

I am really disappointed in this. I had heard so many good things, and it really just wasn't what I was expecting. The ending was awful, cheesy, and really made me wonder what people have seen in this book.