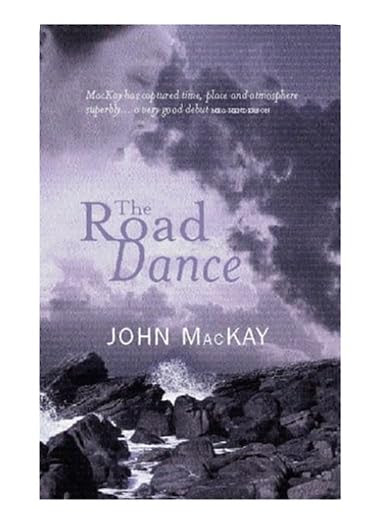 The Road Dance by John MacKay

Life in the Scottish Hebrides can be harsh - 'The Edge of the World' some call it. For the beautiful Kirsty MacLeod, the love of Murdo and their dreams of America promise an escape from the scrape of the land, the repression of the church and the inevitability of the path their lives would take.
But as the Great War looms Murdo is conscripted. The villagers hold a grand Road Dance to send their young men off to battle. As the dancers swirl and sup, the wheels of tragedy are set in motion.

The book took hold of me from the very first sentence until the last. Having never visited the Scottish Hebrides, I was enthralled reading of the climate, the landscape, and the customs of the people there. MacKay creates a bleak, harsh atmosphere on the island; the wind howls, the rain pours, and the waves crash against the jaggy black rocks. This is a perfect setting for the most shocking of crimes to take place. I absolutely devoured it.

MacKay captures perfectly the feeling of war-torn Britain, even in such an out of the way place. The grief, heartache, and apprehension are all shoved into your heart and held there until the end of the novel. His writing is so descriptive that you mourn and panic with his characters as though you were an islander yourself.

Without giving too much away, the plot is fantastic. The suspense is constructed in an excellent way; each turn of the page pushes you further into the story, and mesmerises you entirely. The characters are perfect in their own little ways, and I loved reading of their community and behavioural rules. It is interesting that certain events in the novel happened only because the characters were frightened of what others would think of them. It definitely made me think about how that happens in the world today; certainly not in the same religion-based way, but absolutely in its own modern designs.

This is an excellent debut novel and has paved the way for me to read more MacKay. I would encourage anyone to pick this up, but particularly as a Scottish girl, I feel a bit more in tune with our islander neighbours, and would love to visit the town this novel was based on. Definitely one for the bucket list. Please pick this up and give it a try, I already have two people in mind who would love it. I am sure this is an untapped classic.