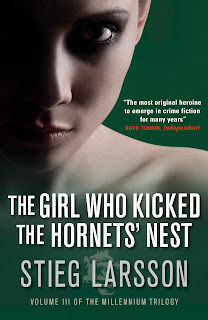 The Girl Who Kicked the Hornets' Nest by Stieg Larsson

Salander is plotting her revenge - against the man who tried to kill her, and against the government institutions that very nearly destroyed her life. But it is not going to be a straightforward campaign. After taking a bullet to the head, Salander is under close supervision in Intensive Care, and is set to face trial for three murders and one attempted murder on her eventual release. With the help of journalist Mikael Blomkvist and his researchers at Millennium magazine, Salander must not only prove her innocence, but identify and denounce the corrupt politicians that have allowed the vulnerable to become victims of abuse and violence. Once a victim herself, Salander is now ready to fight back.


This review will only deal with the first 270 pages of this novel, as that is as much as I could stomach of this nonsense. Those of you who follow my reviews regularly will know that I very rarely give up on a book. I believe posting a review of something you have only half-finished is cheating. Nonetheless, I tried very hard to get to the end of this, particularly as it's the finale of a trilogy, but I struggled. It's awful. I had faith; I was waiting for the exciting part to come, but it never did.

The story begins exactly where The Girl Who Played with Fire left off. We begin as though it's not a new book, but a new chapter. Time, place, nor situation has moved on in the slightest; we are at a standstill. I was devastated to open this book and find myself not propelled forward in time as I had expected, but in the same quandary as before - bored, exhausted, and confused.

I had mentioned in my review of the second book in the trilogy that Larsson likes to regale us with boring little details. Jesus Joney macaroni, he really goes for it here. My eyes were crossing, I was daydreaming about work, and on one occasion I put the book down and started tidying my room. On a positive note, I was struggling to sleep one night, and reading a few paragraphs helped matters considerably. At times I wondered whether to cut my losses and dig out my old university notes (statistics, maybe, in French), for some lighter, more exciting, reading.

There are far too many characters involved in this tale. Larsson seems to introduce them to help move the plot along and orchestrate twists, but it doesn't allow for any empathy to be garnered for one single person. The huge cast confused me, and meant I had no idea whose dialogue I was reading, nor what they had contributed in previous chapters, or even novels. The Swedish names are quite similar, and are difficult to remember, which made matters worse (I realise this doesn't make me sound very diverse, but it's so very true). Larsson insisted on giving us the entire life story of even the most minor of characters. Yawn, yawn, yawn. Each time a connection is made to unravel the conspiracy, approximately thirty new characters are introduced to complicate matters even further. A friend said this actually continues even as far as the final fifty pages; this contributed greatly to my decision to abandon ship (and all hope).

Hundreds of pages are devoted to the Swedish government's peaks and troughs, rules and regulations, and history in general. We are honoured with asterisks that relate to pages at the back of the book which go into even more detail of Swedish politics and police system, if you have the time to spare for that sort of thing, and have a fetish for the insanely dull. The majority of this was going completely over my head, mostly due to my limited interest in politics (Swedish or otherwise), but mostly due to my unquenchable boredom with the plot.

The book is very poorly constructed in general, and such a disappointment. The best thing to compare it to is the furniture of its fellow countryman, Ikea -it  looks good on the box, but it's a load of rubbish once you open it and try your best with it for as long as you can; in the end you're left completely and utterly disappointed at the waste of your money, time and effort.

Overall, the trilogy just goes downhill. The first novel is exciting and filled with suspense. The second isn't as good as the first, loses its grip on you slightly, but still keeps you hooked. This third monstrosity is almost like the final nail in your coffin. I'd recommend reading the first novel and stopping there if you have half a brain at all.
Posted by JK at 22:03

I've read yourreviews of all three books and have to say, I couldn't agree more. I can't understand at all how these books managed to garner the massive fanfare they did, certainly all three books contain a scattering of decent moments but each one is so incredibly dull and the serial killers and government conspiracies are so cliched it almost reads like a parody.

I managed to make it through all three books and tried watching the TV shows to see if they could cut the dross and provide something a little more enjoyable but they ended up being even worse.