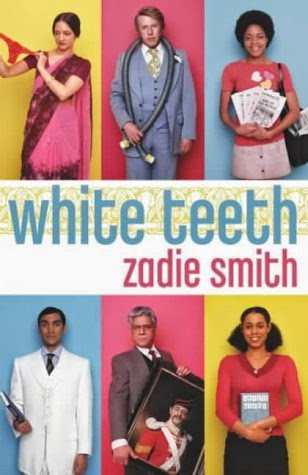 On New Year's morning, 1975, Archie Jones sits in his car on a London road and waits for the exhaust fumes to fill his Cavalier Musketeer station wagon. Archie—working-class, ordinary, a failed marriage under his belt—is calling it quits, the deciding factor being the flip of a 20-pence coin. When the owner of a nearby halal butcher shop (annoyed that Archie's car is blocking his delivery area) comes out and bangs on the window, he gives Archie another chance at life and sets the novel in motion.

White Teeth is a big book. It's a long, detailed study into the lives of two families, and how their cultures and relationships interlink. It's beautifully written, and really captures the social message Smith is trying to portray. The pace and tone is wonderful, with Smith writing dialogue and colloquialisms like a truly well-travelled multicultularist.

Archie Jones and Samad Iqbal's children (one Jamaican-English, and two Bangladeshi-English twins) grow up in a subconscious state of uncertainty between tradition and home. Their parents lament over their identity and loyalty to their roots, and their actions show their own uncertainties, fears and hopes.

There are many storylines going on at once within the novel, some even spanning 100 years into the past. This was a great technique in showing us family history, and the reasons behind the characters' personalities and quirks. My issue here was that the novel began with the scene noted in the blurb above - the attempted suicide of Archie Jones. The book ends with another major incident in Archie's life, yet in between these two events, Archie barely makes his presence known throughout the novel. Oh, he's there all right, speaking to other characters, and mentioned within the plot, however he says and does nothing to make him memorable. Why is this? It can't be because he's a solid man in the background, the last man in every situation - he was a pathetic wimp of a man. Was it because he was a pathetic wimp of a man that Smith felt she should give him some sort of glory? I couldn't understand it, found it a real shame, and felt that the novel could've ended better had Archie been more of a monolith, or if it had ended with one of the further developed characters.

I really loved the first two thirds of the novel as we explored the characters' lives, roots, and personalities. I like multiple narrative, and I like seeing things from the perspective of more than one character, however I felt the tail end of the story became incredibly chaotic, unnecessary, and even a bit dull. All characters turned into caricatures of themselves, and those I had loved became ghosts of their former selves. I definitely closed the book last night with an air of disappointment. It was a hard slog to get through, and I once again I'm left knowing that just because lots of people like a book, doesn't mean it's actually good.

This is a very short review for a very long book, however I really don't have much else left to say. The plot bounced from place to place without warning, and came to a standstill out of nowhere. There are still lots of loose ends untied, however my complete disenchantment with the characters means it doesn't matter at all.
Posted by JK at 12:00