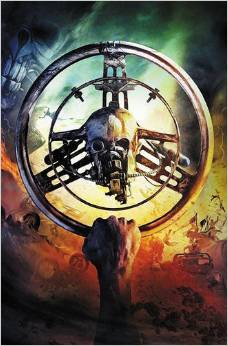 After basking in the cinematic explosion that was Mad Max: Fury Road, I was utterly compelled to see it again. My second viewing did little to quell my hunger, and I soon realised I had questions that were never answered by the script. I needed far more Furiosa than a normal woman's daily dose. Trawling through forums discussing theories of what happened to that arm was mildly satisfying, but I wanted something official, something concrete. Enter this graphic novel, duly pre-ordered months ago, and now finally in my wolfish little hands.

Miller and his collection of artists treat us to the back stories of characters in the lead up to Fury Road. This is an exciting concept, which fell on its face for me. Every single prequel here is crying out for more depth and detail. We find out how Nux made it into the Citadel as a child, by what was it about his strange laughter that made them reel him in? It took only a few pages to show us his acceptance, but this posed more questions than it answered. Immortan Joe's discovery of the Citadel, and the appointments of The People Eater and The Bullet Farmer were enjoyable, but I needed a lot more than I was given. Max's story came in two parts, which were particularly bleak, but very typical of the wasted setting.

My favourite section was the compilation of tales building up to the creation of the War Rig. I can't say this beast of a vehicle was something I needed to hear the story of, but I hadn't considered the parts coming from different places, and belonging to different people, each with their own stories. Leanne and her dolls are an incredible part of this curiosity which I won't forget in a hurry. The artwork in War Rig was noticeably different to the other issues; far more raw, with jarring colours and lines. This bolted me out of my comfort zone immediately, and did wonders for my attention. A truly incredible addition to the novel, the history of a vehicle is surprisingly macabre.

Furiosa. My Furiosa. How disappointed I was in you. I came out of that cinema brimming with utter glee that this film had treated its female characters in such an amazing way. Furiosa's gender was never questioned; her strength and determination said it all for her. The film shows her empathy for the brides, and her unrelenting desire to remove them from their abuser. We're subtly made aware of the brides sufferings, although this itself is never depicted on screen. The comic veers off in the opposite direction, with gratuitous rape scenes that seemed to be the only focus. With the film hinting at rape, and viewers simply understanding the connotations, there's something uncomfortable about the need to render so incessantly something we should simply accept as fact. The brides are shown to be weak and unable to help themselves, with Furiosa given to us as a rape apologist and a pro-lifer. We see her stopping the amateur abortion of one of Joe's children, and telling the brides they lead a comfortable life with food and water, and to be grateful for that. It's also implied that Furiosa was once a bride, which leads into other areas of analysis in relation to trauma. Despite this possibility, I was utterly disgusted. This was not my Furiosa.

Despite the need to find out more, I almost wish I hadn't picked this up. Of course, there's going to be another film, so I imagine secrets are being kept for that. I just hope some of my expectations are met there, as this wasn't nearly as good as I'd hoped it to be. What a lovely day.
Posted by JK at 20:52