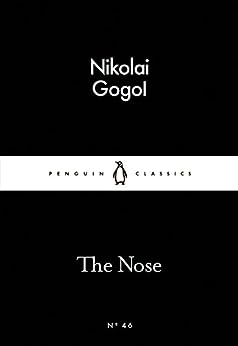 The Nose by Nikolai Gogol

Russia's great nineteenth-century satirical absurdist shows what happens when a man wakes up with his nose missing, and illustrates the folly of boasting.

I really enjoyed this satire.

Gogol weaves an utterly absurd tale about a man who wakes up one morning without his nose. Worse than that, the nose appears in his barber’s morning roll. And to go even further, he soon encounters his nose wandering around wearing a uniform of rank - a rank higher than his own.

It’s a social commentary on vanity, the importances we place on appearance, on rank and class, and human nature’s paranoia when looked upon by other person. Gogol’s story follows no logic, makes no sense, yet his thoughts on the matter are made completely clear. I particularly loved how the nose fell out of a bread roll one moment, sized as one would expect a nose to be sized, and the next moment it was strolling round St Petersburg the height of a man, and wearing men’s clothing - with no explanation provided.

Reported as having quite the monstrous nose himself, I am basking in the idea that this story came from his desire to get rid of it.