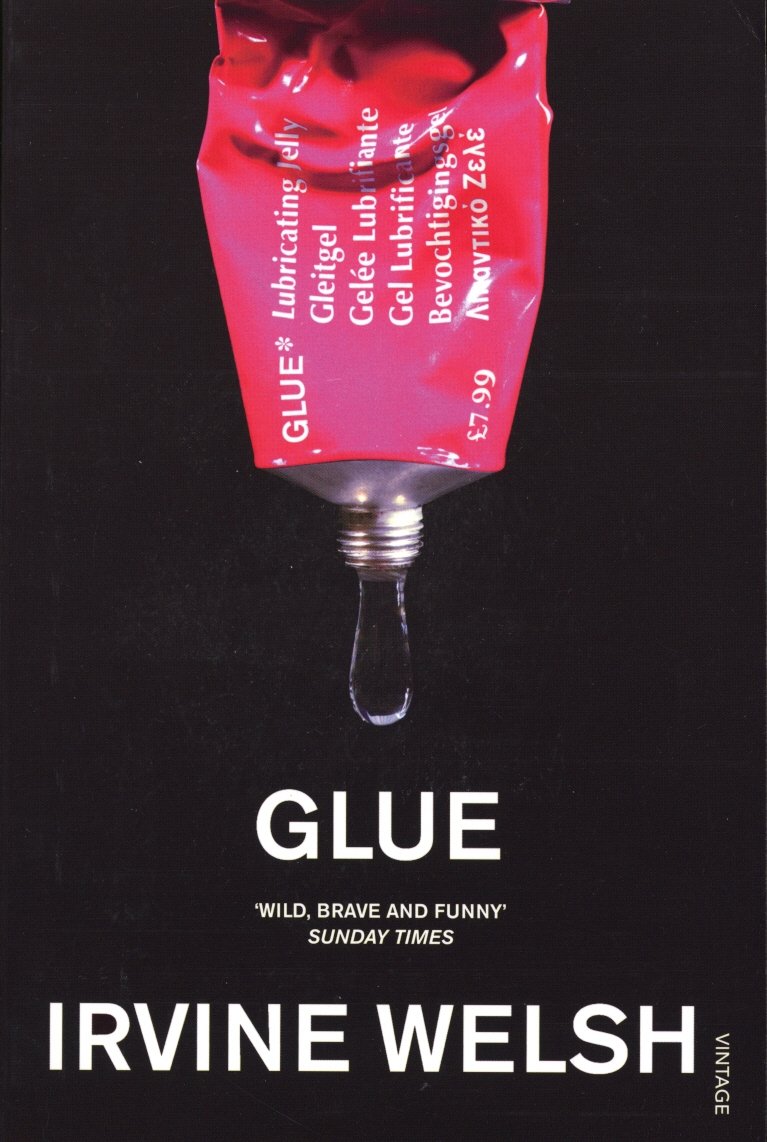 Glue is the story of four boys growing up in the Edinburgh schemes, and about the loyalties, the experiences - and the secrets - that hold them together into their thirties. Four boys becoming men: Juice Terry, the work-shy fanny-merchant, with corkscrew curls and sticky fingers; Billy the boxer: driven, controlled, playing to his strengths; Carl, the Milky Bar Kid, drifting along to his own soundtrack; and the doomed Gally - who has one less skin than everyone else and seems to find catastrophe at every corner. As we follow their lives from the seventies into the new century - from punk to techno, from speed to Es - we can see each of them trying to struggle out from under the weight of the conditioning of class and culture, peer pressure and their parents' hopes that maybe their sons will do better than they did.

I’ve always found Glue to be markedly different from Welsh’s other works. Its slow burning plot and in-depth character development contrast with the usual swedgein and paggerin.

We’re given four boys as kids in the seventies and watch them grow up into the early 00s. The depth is unreal; their families, their needs, their longings, their enemies, all seem to interlink as the four of them traverse the cracked pavements of life together. As they disperse and come back together at various points over the years, the same rules apply, and the same things seem just as important as they did years ago.

Where other Welsh novels are heavily plot driven, Glue is solely about the characters, with the plot occurring in the same way real life does - sporadically. It reads as an intense study of their lives, where everything went right, and where everything fell apart. There’s an intimate feel to each character’s narrative; you know him so well you’re pals with him.

A special mention has to be made for mad shagger, Juice Terry Lawson, who, of the four boys, is probably the most famous in the Welsh universe (see:
A Decent Ride). That is one origin story I was keen to explore; Terry’s desires and exploits barely shift throughout the years, and although he’s an unlikeable character, he is utter class. Seeing his roots and his growth was brilliant, and his redemption in the Glue finale was (if a word like this can be used for Lawson) heart-rending.

Welsh hits us with profound commentary on growing older, which hits hard. The passing of time is a dick to us all, but we’re reminded of factors which could have made things much worse had we encountered them growing up, or had we encountered them without the glue of our pals. That these factors played their part in setting the direction of the boys’ lives seems unfair, yet completely realistic.

Although some Trainspotting characters make cameo appearances, alongside a very small one from top favourite, Filth’s Bob Toal, Glue isn’t prescribed the same anarchy or disgust, nor does it depend whatsoever on characters and references from other novels. This one is about growing up in the scheme, defending your pals, and making life or death mistakes.

Back up yir mates, never cross a picket line, never hit a lassie, never shop anyone to the polis - friend or foe.