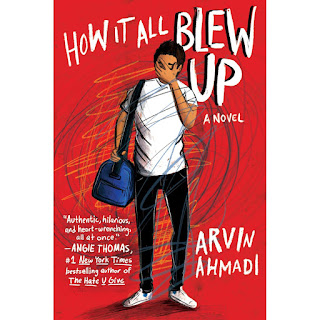 How It All Blew Up by Arvin Ahmadi

Eighteen-year-old Amir Azadi always knew coming out to his Muslim family would be messy--he just didn't think it would end in an airport interrogation room. But when faced with a failed relationship, bullies, and blackmail, running away to Rome is his only option. Right?
Soon, late nights with new friends and dates in the Sistine Chapel start to feel like second nature... until his old life comes knocking on his door. Now, Amir has to tell the whole truth and nothing but the truth to a US Customs officer, or risk losing his hard-won freedom.

Being part of an oppressed community is difficult. The lack of understanding, the preconceptions, the stereotypes, even the outright hatred directed at you - all of it is impossible to deal with. But being part of two oppressed communities, in this case LGBT and Muslim, comes with double the pressure.

Enter Amir, our protagonist, to tell us all about it. He’s eighteen, Muslim, gay, and not out. Coming out to his parents is a terrifying thought to him, and he carries out quite possibly the most extraordinary avoidance technique of all - he flies to Rome to get away from them, to escape disclosing the inevitable truth.

There’s something horribly heartbreaking about Amir feeling this was his only option. That he wasn’t able to speak about the person he truly is without fear of consequence, fear of loss. And yet, this is sadly true for many LGBT people, no matter how many oppressed groups they belong to at once. That fear makes them hide who they are, robs them of living their lives, and ultimately creates feelings of isolation, of otherness, which are difficult to untether from.

I enjoyed living Amir’s new, out life with him in Rome. I loved meeting new friends with him, seeing him in romantic entanglements, feeling his new emotions at finally finding a sense of belonging. The Italian setting was perfect for depicting an entirely different word - beautiful European architecture contrasting with high school lockers - really making the reader feel Amir had found his real home.

The story of acceptance and togetherness was truly heartwarming, and it’s an important piece of LGBT literature, particularly for the intended YA audience. I did feel there could have been more detail on Islam, on why Amir felt this was a factor in how his parents would accept them. Although as a family, they remained true to their Persian culture, they didn’t seem to be overly religious, and Islam played no part in the story. I would have liked to have been able to understand more about this aspect of Amir.

An important novel, normalising homosexuality, and giving us some nice romantic European scenes, which will instill hope and aspiration for LGBT teens.