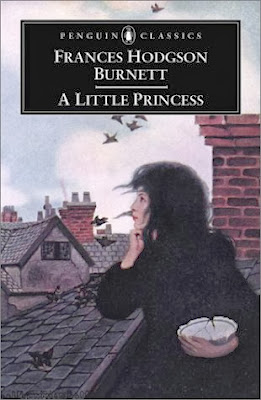 Sara Crewe, an exceptionally intelligent and imaginative student at Miss Minchin's Select Seminary for Young Ladies, is devastated when her adored, indulgent father dies. Now penniless and banished to a room in the attic, Sara is demeaned, abused, and forced to work as a servant.

Here's another novel I've latched on to again for nostalgic purposes. I remember Sara's story hitting me hard when I was younger, and it was no different this time. I'd come away from the book vowing to become a better person; a more loving and generous person like Sara, with the qualities of a princess. Obviously it never happened, but the sentiment was there.

The story is so amazingly charming, and comes with heavy moral messages and reproach. I love this happening in children's books, but not in an obvious way. In this case, the messages are weaved into the storyline entirely, as though they aren't even there. This has been done so cleverly that it's clear to see how young girls have been influenced by this book.

Sara is such a gorgeous little character that she makes you want to become a better person immediately. She helps others, and suffers her turmoils inwardly so as not to make anyone else aware of her unhappiness. To get through these, she uses her imagination to convince herself she is somewhere else, and someone else, entirely, such as a prisoner in the Bastille. This takes her mind off her plight, and also helps those around her. She also adopts the idea of becoming a princess some day, and the looks on her keepers' faces when this happens. Sara realises she can still behave like a princess, despite her circumstances, so maintains her good manners and kindness, which ultimately lead to her well-deserved happy ending.

What I liked best about the novel was the idea that a princess isn't someone incredibly special with royal blood. It's far deeper than that. A princess can be clad entirely in rags, and still have those princess qualities. It's about helping others, and having an impact on their lives; it's about being loving, caring, having a good sense of dignity, considering others, and continuing on despite the obstacles, without allowing others to destroy your happiness. Now, I don't know many people like that. Those people are very rare, and probably should be given a royal title. This realisation was my favourite part of the story.

An absolutely enchanting novel for all ages; I would absolutely recommend either reading this as an adult, or introducing it to a younger person in your life.
Posted by JK at 19:15 No comments: 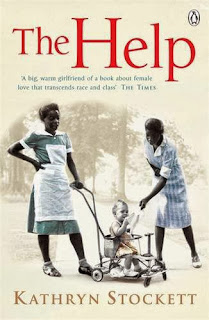 The Help by Kathryn Stockett

Enter a vanished and unjust world: Jackson, Mississippi, 1962. Where black maids raise white children, but aren't trusted not to steal the silver. There's Aibileen, raising her seventeenth white child and nursing the hurt caused by her own son's tragic death; Minny, whose cooking is nearly as sassy as her tongue; and white Miss Skeeter, home from college, who wants to know why her beloved maid has disappeared. Skeeter, Aibileen and Minny. No one would believe they'd be friends; fewer still would tolerate it. But as each woman finds the courage to cross boundaries, they come to depend and rely upon one another. Each is in a search of a truth. And together they have an extraordinary story to tell...

What a phenomenal read. It's so deeply illustrative that I challenge anyone to read it and come back as the same person. Stockett presents us with the very intricate spectrum of the black/white relationship; it ranges from hatred and abuse, to love and reliance, and Stockett shows us the differing opinions of both black and white on the racial conflicts in 1960s Mississippi.

The plot is strong, and the characters are even stronger. I loved many, hated many, but was given all of their glorious back-stories, and could clearly understand my feelings for them. This book isn't just about how the help were treated in the sixties. It's about standing up when you're told to sit down, recognising people are just people, that we're not so different from each other, being courageous when you know you're doing the right thing, and most of all appreciating the quality of a person from the inside.

Stockett uses a multiple-voice narrative to portray the thoughts and feelings of three women; two black maids, and one white woman writing a novel based on the working experiences of the others. Each woman's voice is lucid, and feels incredibly real, whilst still remaining distinct from the other two. The women are funny and realistic; I both laughed and cried with them, and found it increasingly difficult to remember they were fictional. You can really feel their voices; feel the fear, the love, the faith, and the sadness.

I loved hearing about life in the sixties. Some of the things the vapid white women worried about were unreal, and the way they treated each other was unholy. The social etiquettes, the false charm, the disinterest in their children, and the bitchy bridge club absolutely fascinated me.

It's amazing to see how racism can be ingrained simply by the things people are told, how they are raised, and by the power of rumour, or the media. For example, families in the sixties installed separate toilets for their staff, as a scientific report was published advising diseases could be caught, and their children contaminated!

This is an important story, and such a good one that I'd urge anyone to read it. Stockett shows us how far we've come in racial equality, but reminds us how far we still have to go. I think the book confronts the reader somewhat, and this could be the most important factor. I could gush about this book for far longer, but I'll leave you with this:

“Wasn't that the point of the book? For women to realize, We are just two people. Not that much separates us. Not nearly as much as I'd thought.”