Ray Sirico used to have it all. Once, he was the brilliant and outrageous Clown Prince of Comics, who reinvented the venerable superhero Skylord, and ranted and rollicked everywhere from TV talk shows to Hollywood premieres.
But that was in the ’70s and ’80s. Now it’s 1993, and Sirico is a drunken has-been. His wife has left him, his movie flopped, and his comics’ publisher is doing so poorly that its new corporate parent has come up with a radical marketing stunt: the Death of Skylord.
Still, Sirico has one last chance to recapture the limelight: Fandemonium, the nation’s biggest fantasy convention. But others are coming to the con too: Harmony Storm, the sex-crazed actress who broke up Ray’s marriage; his former collaborator Tad Carlyle, who now has his own company, and a troubled relationship; Fred D’Auria, a fanboy fleeing adolescent traumas, and corporate conspirators who are plotting to sacrifice Sirico’s greatest creation for motives deeper than even his fevered imagination could conceive.

I have to kick this off by saying I'm really worried I won't be able to convey to you just how much I enjoyed this book; so much so that I felt an odd sense of loss once it was over. Fandemonium is a four hundred page tome, and I can safely say I would happily read another four hundred; then four hundred after that. I loved it.

The story is a satirical look at the business side of comic books. All of our typical stereotypes are here, both business and fanboy. Being a partner in a successful business (unfortunately retail, rather than publishing) and also a girl who is partial to a con or two, it was hilarious to see the plot unfold with familiarity. Although his cynicism runs through every thread of the storyline, it's clear to see Schindler's love for comic books running alongside his pessimism.

Schindler nails his characters completely. The depth of each of them was impressive, and the way I felt about them individually was incredible. Our protagonist, Ray Sirico, is the type of man I absolutely despise. Sexist, racist, homophobic, and just entirely judgmental of everyone, he's a true asshole, and we are shown him as having not a friend in the world. But he was written in such a way that I was keeping my fingers crossed for him in a "you show them, Ray!" attitude. Amazing. I was also glad to see Schindler tying all of the characters' affairs up at the finale, and I was entirely satisfied to see everyone getting what they duly deserved.

The story is so easy to get carried away with. We flit from one character's narrative to another, which creates a huge picture of an intricate plot which is strangely easy to keep track of. Schindler employs the art of metafiction (in the form of scripts, emails, memos, interviews, programs, book prices, newspaper articles etc.) at the end of each chapter to give us yet another view of his world. Both of these devices are personal favourites of mine, and only made me more eager to continue reading.

When the day of Fandemonium arrives, we are treated to the most in depth description of a con I have ever witnessed. Schindler captures the crowds, the confusion, the colour, and the costumes so well, and even unravelled how I felt the last time I went to a con on my own; I didn't even realise I had felt any of these things until I was in the shoes of one of Schindler's characters: a fifteen year old boy.

What impressed me most were the characters and stories created by the fictional publishers within the novel. Schindler told us these stories, and introduced us to these characters, in such depth that we were up to speed on the entire canon pretty quickly. That Schindler has all of these heroes and villains in his brain is absolutely overwhelming to me, and I loved taking a break from our 'real' characters to tune into a bit of Skylord. Although She-Zanna was my favourite.

You don't have to be into comics to read this book, although it helps you understand some of the smaller references. This book is about people, relationships, power, and weakness. It's hilarious with sober undertones, and despite the bright colours and laugh out loud references, it's really a serious look at the human condition.
Posted by JK at 21:32 No comments:

A pilot forced to land in the Sahara meets a little prince. The wise and enchanting stories the prince tells of his own planet with its three volcanoes and a haughty flower are unforgettable.

The Love of Marisol by Christos Toulouras

When Leo’s marriage ends, he falls into the depths of depression. He decides to escape the loss and the heartbreak with a trip to the other side of the world – Lima, Peru. In some ways, his journey becomes an unexpected salvation as his passions are reignited by the local food and people, the climate and the beautiful and alluring Marisol.

I am always incredibly appreciative when both authors and publishing houses contact me to review their work. I find it flattering initially, and then I'm always interested to read the author's work. Let's face it, they've done more than me in the world of writing and this garners a lot of respect. The issue I have is that I always want to give a good review, which can sometimes go against my relentless need to be honest, both in my reviews, and in life. As I wouldn't feel comfortable being anything other than frank, here it is:

The Love of Marisol follows the story of Leo, who has recently gone through a divorce. He travels to Peru to visit his cousins; an adventure intended to take his mind away from the misery his situation has caused him. During the fourteen hour flight, Leo goes through complete emotional turmoil, and Toulouras writes this in a very dismal, believable way; one which is akin to the types of depression I've seen in the past. His feelings of emptiness, loneliness, and loss are well described, and his feelings of isolation in contrast to his aversion to any social contact will be, I feel, familiar to some.

Upon landing, Leo still feels terrible, but perseveres and goes to a club with his cousin and friends. These characters are as shallow as puddles; we're given a limited backstory to the cousins, and one or two friends, but these fall short due to an amazing lack of dialogue between any of the characters. Leo meets Marisol in the club and the depression magically disappears. We then flurry through a whirlwind love affair peppered with sex scenes. Fin.

My main disappointment here was that Marisol, and the other women in the novel, were described as nothing more than objects. Each woman was described in depth as a Latin American beauty, we were told how their bodies moved, how their skin and lips looked, and how they very much wanted to have sex with all the men. Some were merely described as 'sexy'. Great. Marisol barely had any dialogue at all, apart from telling Leo how much she had fallen for him; we didn't get to understand her as a character, no depth, no backstory, a total object. When Leo met her sisters (who were both smoking hot as well), he made the assumption the one cradling the small baby had been humped and dumped due to a lack of male presence in the home. Come on, bro.

Although I liked that the ending wasn't necessarily a standard happy one, it didn't sit too well with me either. Leo says goodbye to Marisol, saying he'll email her and he'll return one day, gets to the airport, soliloquises about how he'll never see her again, then moves all of his attention on to a Swiss blonde. You'll forgive me for saying this is all too familiar, and Leo is not a likeable character.

I also noticed a number of errors in the novel, mostly with punctuation. Sometimes a similar, but incorrect word was used; although I can always let this slide, it was rife throughout the somewhat small number of pages, meaning more noticeable and more irritating. I did wonder if the novel had been translated, as the author is originally from Cyprus, but I couldn't find this out.

Again, it really pains me to post a bad review, but there were so many things about this irking me. Toulouras is a good writer; his portrayal of Leo's mental state at the beginning of the novel was beautiful, and his descriptions of Peru were glorious. The plot and characters just need a lot of work.
Posted by JK at 21:21 No comments: 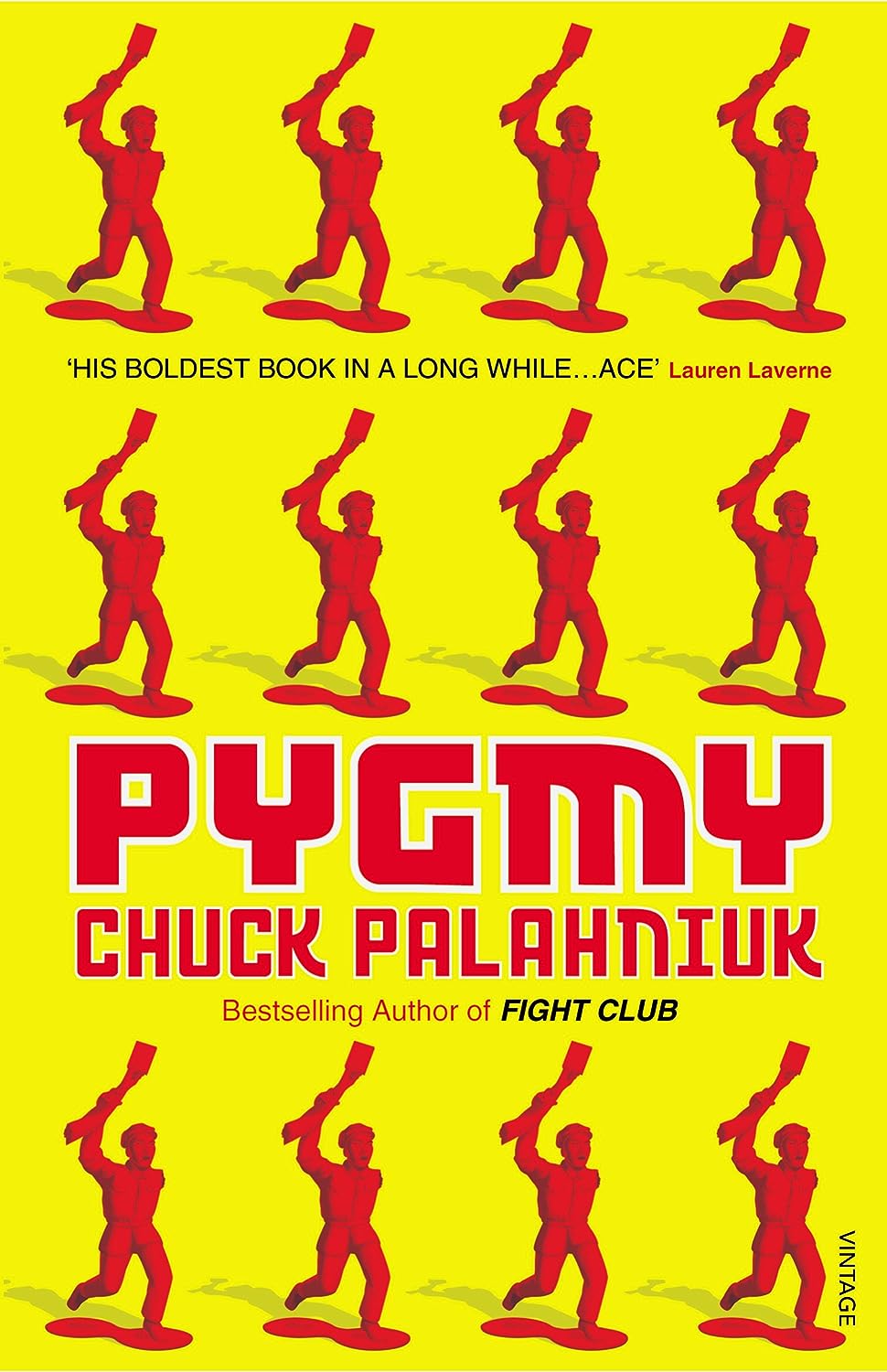 Pygmy, one of a handful of young adults from a totalitarian state is sent to the United States, disguised as an exchange student, to live with typical American families and blend in, all the while planning an unspecified act of massive terrorism.

Opinions are truly divided on this novel, and the split seems to go straight down the middle between literature lovers and Palahniuk cult fanatics. Being very much in the former camp, and having never read a Chuck P novel which has blown me away, I want to set a disclaimer to state my own opinion is very much unbiased: I liked it.

Our narrator, Pygmy (named due to his tiny stature) is brought up by a brainwashing government in a country whose name we never learn. His sole purpose in life is to bring down the United States in a mission called Operation Havoc. The entire novel is written in broken, sometimes incredibly childlike, English. Although this is a complete mindbend at the beginning of the novel, the reader gets into their stride and begins to understand. I did have a couple of issues with this narrative style, however. One was that Pygmy was given to us as a child prodigy; one who had the periodic table, along with various other intellectual accomplishments, nailed by the time he was four. Surely someone of this mental calibre wouldn't have any problems speaking a second language? I couldn't stop wondering about it. The second disappointment was that throughout the novel there was very much a feel of making fun of the foreigner who can't speak our language. Not cool.

Palahniuk successfully pokes fun at American institutions, and although these jokes are the obvious stereotypes we all know well (corrupt Christianity, obesity, the power of consumerism, sexualisation of almost everything), I found them hilarious and very true. This is probably because I'm not American, or maybe because I've only just visited America and experienced these things for myself.

The ending disappointed me massively. I haven't actually read many Palahniuk novels, and some I read years ago before I'd whet my literary whistle; I don't feel this type of ending is something he gives often, and I didn't feel here it was appropriate. Maybe he was hinting that Westernisation is addictive and desirable, but I don't feel someone trained as a terrorist and bred into a hatred of America would be so easily swayed.

Yes, it could've been done better. Yes, the narrative style was a bit hit or miss. Yes, it was a tongue in cheek portrayal of a terrorist's view on Westernised society. YES, I would love to read something in this vein which is far more serious, and far more educating. But I laughed, I was disgusted, and I liked it.
Posted by JK at 13:43 No comments: