The Meek One by Fyodor Dostoyevsky

Dostoevsky perfectly uses stream of consciousness narrative to get inside the head of a husband and pawnbroker as his wife lies dead before him. Driven to suicide by his own selfish way of loving her, the grief consuming the pawnbroker is mingled with regret, self-deprecation, and futile justifications. The jarring contrasts of all of these build a clear picture of both his mental state, and the events and behaviours that led to the meek one taking her own life.

This style of writing also allows for the pawnbroker to be considered an unreliable narrator. Grief aside, we are only able to view his wife through his own eyes, and it's entirely possible there were various other reasons at play here.

A fantastic short exploration of the human psyche when confronted with loss, and one you absolutely have to be prepared for some confusion, and some reading between the lines. A perfect depiction flaw and shame.

Johnny Got His Gun by Dalton Trumbo

This was no ordinary war. This was a war to make the world safe for democracy. And if democracy was made safe, then nothing else mattered--not the millions of dead bodies, nor the thousands of ruined lives...This is no ordinary novel. This is a novel that never takes the easy way out: it is shocking, violent, terrifying, horrible, uncompromising, brutal, remorseless and gruesome...but so is war.

What a book. This is an utterly unforgettable work; a masterpiece wrapping the romanticism of war into a tight parcel and storing it forever out of sight.

Joe Bonham is a soldier who is hit with a German shell in WWI. He wakes up in hospital unable to see, hear, speak, or even move. His injuries are horrific, but not quite as horrifying as following his mental state as he comes to terms with the loss of his senses, each of his limbs, and practically, his life. He's a dead man who thinks, and his thoughts are profound, they are tormented, they are hopeless, and they are beautiful.

We are shown Joe's mental decline as he comes to terms with his disability (if disability is strong enough a word to describe what Joe is suffering). We are shown memories of his life before he entered into war. We hear his thoughts on fighting for democracy, for decency, and I'll be damned if we don't agree with each and every single one of them as we lie on that bed immobile with him.

Joe painstakingly learns how to keep track of time. He counts the nurse's visits, he counts his baths, the times his bed is changed. He loses count, and in doing so, loses a bit of his mind each time. He tries again; he has nothing else to do. He spends days working out how to communicate; rejoices when he does, only to discover what he has to say has no importance to the man; he is to remain silent, to remain trapped. This is undoubtedly the most harrowing point of them all.

Trumbo's juxtaposition of past and present sent shockwaves through me. Just as I was spending young adult years with Joe, I was transported back into that room I couldn't see or smell, and reminded we were trapped, prisoners in Joe's body without a hope in hell. The contrast of his freedom against his captivity was heartbreaking, sickening, and hurt me deeply.

I was amazed this was published in 1939. It feels so contemporary, so real, and entirely relevant that it's a wonder almost eighty years have passed without the slightest political change on the novel's themes. Trumbo conveys a perfect anti-war message that is impossible to argue with; the importance of human life, the futility of war, and the price we pay to those who orchestrate the wars, yet never seem to fight them.

As someone who can't quite bear watching the news most days, as someone who likes to hide from the atrocities of our world, this hit me hard. Read this for the message, read it for the story, I don't care. I consider this required reading despite the gloom, despite the claustrophobia, and despite the horror of being imprisoned in your own body. Read it to learn about war.
Posted by JK at 22:09 No comments:

The Scarlet Letter by Nathaniel Hawthorne

Set in the harsh Puritan community of seventeenth-century Boston, this tale of an adulterous entanglement that results in an illegitimate birth reveals Nathaniel Hawthorne's concerns with the tension between the public and the private selves. Publicly disgraced and ostracized, Hester Prynne draws on her inner strength and certainty of spirit to emerge as the first true heroine of American fiction. Arthur Dimmesdale, trapped by the rules of society, stands as a classic study of a self divided.

This novel is essentially an exploration of Puritan regime and beliefs. They preach massively against sin and punish sinners as they deem appropriate. Each of them claim to be living devout and pure lifestyles, but the novel shows us that none of them really are; each of them a hypocrite, they condemn our protagonist to a life of shame, and futilely brand her with a mark to declare her mistakes, despite the bigger proof of her misdeeds walking alongside her every day in the form of her daughter.

Hypocrisy looms all around; it seems ridiculous that a woman, widely known to be a witch who enjoys summoning the devil at night, is kept safe and respected due to who her family is. Hawthorne also makes clear that the inhabitants of New England had travelled there to leave behind the religious and social constraints they had previously experienced, yet all they seemed to do was set up entirely similar rules and hierarchies to those they had so wilfully tried to escape.

I did find some passages slow to get through, bordering on pedantic. Some of the language is difficult to engage with, and I'd have loved some more background to all of the events. Being more of a socio-historical commentary than a story, however, this wasn't to be.

Hawthorne's depiction of the Puritan colonists at this time was enlightening, if a little bit frightful. There was a lot going on, and I'm sure I missed a lot of it, but I enjoyed the journey. Symbols, social commentary, and the human condition all came together to give me an unforgettable glimpse of the Puritan pietism, and the demons that can be unleashed as a result.
Posted by JK at 17:01 No comments: 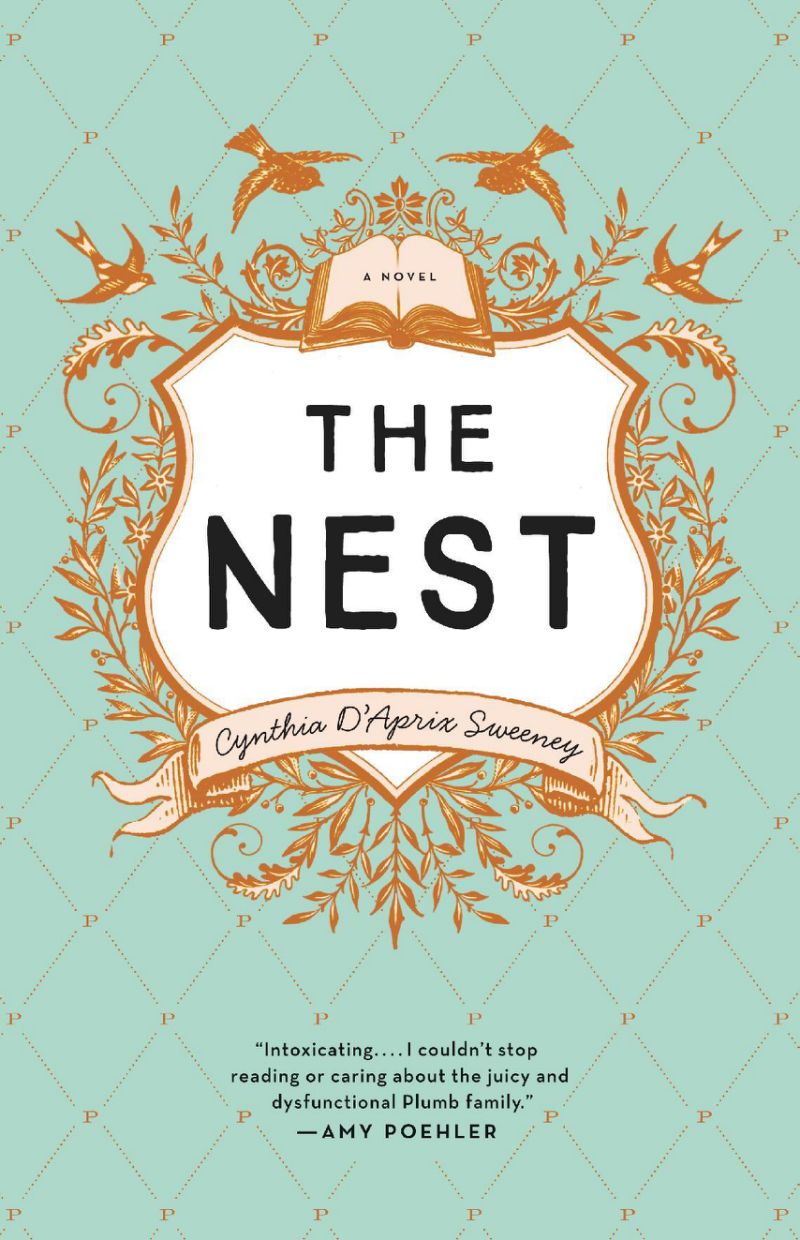 The Nest by Cynthia D'Aprix Sweeney

Every family has its problems. But even among the most troubled, the Plumb family stands out as spectacularly dysfunctional. Years of simmering tensions finally reach a breaking point on an unseasonably cold afternoon in New York City as Melody, Beatrice, and Jack Plumb gather to confront their charismatic and reckless older brother, Leo, freshly released from rehab. Months earlier, an inebriated Leo got behind the wheel of a car with a nineteen-year-old waitress as his passenger. The ensuing accident has endangered the Plumbs joint trust fund, “The Nest,” which they are months away from finally receiving. Meant by their deceased father to be a modest mid-life supplement, the Plumb siblings have watched The Nest’s value soar along with the stock market and have been counting on the money to solve a number of self-inflicted problems.

The Plumbs are three New York siblings who have each been relying on their inheritance (to be paid on the fortieth birthday of the youngest) to bail them out of mistakes, pad their kids' futures, whatever a seriously large sum of money can get in New York these days. The fourth Plumb sibling gets himself involved in a scandal, resulting in his mother using The Nest to keep things quiet and pay for his stint in rehab. On his emergence from vice detox, his brother and sisters band together to demand their money back. Sounds self-absorbed, doesn't it? It was; I loved it.

The views of New York Sweeney gives us, and the quick mentions of places you may have been, were something of a delight, however fleeting. Even the brownstones, the stoops, the park - gorgeous.

Sweeney does a great job here with multiple viewpoint narratives. With the siblings in similar, yet alternating levels of apathy with each other, each of their feelings, memories, and grudges are shown to us as they come together to discuss and ameliorate the desiccated funds.

Having agreed to no drinking at the lunch date with their booze and drugs addicted brother, the three siblings go separately to three different bars around Grand Central station for a quick shot of Dutch courage. This is where we first learn of their motivations and demands as individuals, before they all meet and switch on their social facades. It was subtle, yet absolutely glorious.

None of these people are likeable. They're all shallow, selfish and greedy, with complete tunnel vision focusing on their own wants. None of them were concerned for their brother's descent into shame; each of them were solely concerned with their inheritance, or what the lack of it would mean for them and what they'd have to sacrifice. They were complete New York caricatures, yet their downfall was so utterly delicious, it read like gossip.

As I was approaching the end of the novel, I wondered how Sweeney was going to wrap everything up with only twenty pages to go. It didn't seem enough, and if I'm really honest, it wasn't. The finale was the happy ending I didn't think would come; didn't think should come, and I was disappointed. Everything tied up nicely in a pretty box with a tight little bow - not something I usually subscribe to.

Despite the ending, this was a well-written story with a delectable plot. Who knew a hand job could have such disastrous effects?
Posted by JK at 12:37 No comments: