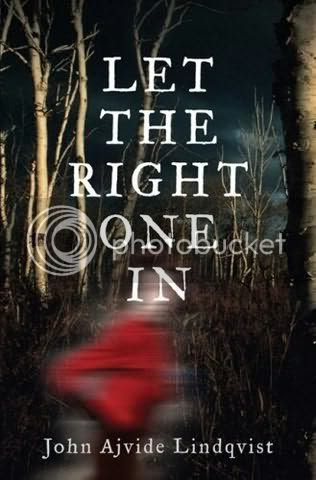 Let The Right One In by John Ajvide Lindqvist

Oskar and Eli. In very different ways, they were both victims. Which is why, against the odds, they became friends. And how they came to depend on one another, for life itself. Oskar is a 12 year old boy living with his mother on a dreary housing estate at the city's edge. He dreams about his absentee father, gets bullied at school, and wets himself when he's frightened. Eli is the young girl who moves in next door. She doesn't go to school and never leaves the flat by day. She is a 200 year old vampire, forever frozen in childhood, and condemned to live on a diet of fresh blood. John Ajvide Lindqvist's novel, a huge bestseller in his native Sweden, is a unique and brilliant fusion of social novel and vampire legend; and a deeply moving fable about rejection, friendship and loyalty.

It's not a book I'd recommend to someone who was particularly sensitive, squeamish in any way, depressed, nor is it applicable to squealing teens who ~*LuV*~ vampires.

The book is, in fact, more about the worry and terror of things that are in no way supernatural, such as bullying, paedophilia, alcoholism and revenge. It's disturbing, and it's depressing in the sense that each and every character you're introduced to is incredibly unhappy, and is doomed in one way or another. They all need some kind of personal substance, (be it religion, sex, booze, bullying) to live off, and they all live hopeless lives. It's almost as if John Ajvide Lindqvist has created his own world of monsters and gave birth to them through this story.

I really enjoyed all of the subplots and mini-characters that were peppered throughout the pages. They all added an intensity to the plot, which turned the novel into a bit of a page-turner.

I was disappointed in the lack of history given for Eli. Granted, some of it was fed through slowly, perhaps to create suspense, but I feel it wasn't concluded properly and there are still some questions that have gone unanswered for me.

The part of the book I loved most, though, was what happened when a newly infected vampire came into contact with direct sunlight. If this had been a Meyer novel, the lovely vampire would have started glittering like a Christmas tree. Pretty! In Lindqvist's version of events, the vampire bursts into flames and dies. No sparkles here, girls, sorry.

The horrors and gore here aren't the things that will stick with you. It's the human treatment of humans that will really get to you and become the true horror of this novel.

John Ajvide Lindqvist has definitely set the bar for the vampire genre with this modern masterpiece. I loved it, it's my favourite this year so far.