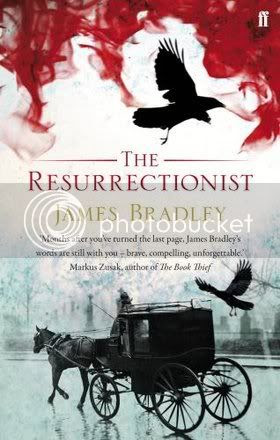 The Resurrectionist by James Bradley

This book is set in London, 1826. Leaving behind his father's tragic failures, Gabriel Swift arrives to study with Edwin Poll, the greatest of the city's anatomists. It is his chance to find advancement by making a name for himself. But instead he finds himself drawn to his master's nemesis, Lucan, the most powerful of the city's resurrectionists and ruler of its trade in stolen bodies. Dismissed by Mr Poll, Gabriel descends into the violence and corruption of London's underworld, a place where everything and everyone is for sale, and where - as Gabriel discovers - the taking of a life is easier than it might seem.

I didn't enjoy this in the slightest. I found it to be a complete chore, which I hate in a book.

There isn't much plot to speak of, barely anything there to hold the reader's attention, and to make matters worse the plot jumped from present day into flashbacks and flashforwards almost constantly, leaving me slightly bewildered, confused and disinterested. The writing takes us nowhere in particular, being almost dream-like, and the ending is unsatisfactory to say the least.

I did like the imagery in the book, which was well written and descriptive, but at it times it came across to me as being sheer hyperbole.

I enjoyed the epilogue (an extended one at around 50-odd pages) slightly more than the main body of the novel, but even saying this is pushing the boat out a bit. I felt that here, Bradley was was writing with less restraint, and I felt that he'd almost become bored with the first part of the novel as much as I had. I expected a grand finale, but I didn't get one.

I don't recommend picking this one up unless you need something to put you to sleep.