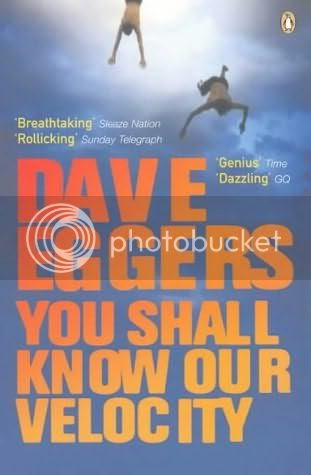 You Shall Know Our Velocity by Dave Eggers

Will and Hand are burdened by $38,000 and the memory of their friend Jack. Taking a week out of their lives, they decide to travel around the world to give the money away. They can’t really say why they’re doing it, just that it needs to be done. Perhaps it’s something to do with Jack’s death – perhaps they’ll find the reason later. But as their plans are frustrated, twisted and altered at every step and the natives prove far from grateful to their benefactors, Will and Hand find that the world is an infinitely bigger, more surreal and exhilarating place than they ever realised.

I was really disappointed in this because I had heard lots of nice and lovely things about Dave Eggers.

It was extremely slow-paced and failed miserably to grab my attention. It was dry, it was flat, things happened, but they didn't really. I felt like Eggers was trying really hard to be profound and different in his approaches to themes, but it just bored me to death.

Travelling around the world is an exciting thing in itself. Travelling around the world to give large sums of money to random strangers is super exciting, and something that people should want to read about. Eggers has made these exciting adventures seem like the last thing I'd ever want to do with my life. He seems a bit too aware of his own cleverness, and he's smug with it, so this gives us a sense of overkill. I felt like I was reading a dream. A boring dream.

And the twist at the end! My reaction was something along the lines of, "Ugh, are we doing this?" It was ridiculous, and reminded me of the way a kid in primary school might end a creative writing adventure.

I had been hoping to get a few more of Dave Egger's books, but I'm really reluctant now. I wouldn't recommend this.

I read this recently too and although I enjoyed it, it took me ages to get through it. A Heartbreaking Work of Staggering Genius is lovely, though.