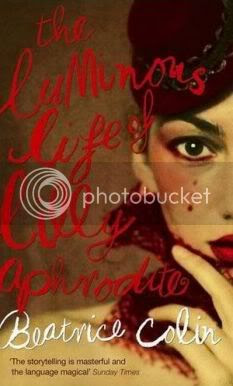 The Luminous Life of Lilly Aphrodite by Beatrice Colin

As the clock chimed the turn of the twentieth century, Lilly Nelly Aphrodite took her first breath. Born to a cabaret dancer and soon orphaned in a scandalous murder-suicide, Lilly finds refuge at a Catholic orphanage, coming under the wing of the, at times, severe Sister August, the first in a string of lost loves.

There she meets Hanne Schmidt, a teen prostitute, and forms a bond that will last them through tumultuous love affairs, disastrous marriages, and destitution during the First World War and the subsequent economic collapse. As the century progresses, Lilly and Hanne move from the tawdry glamour of the tingle-tangle nightclubs to the shadow world of health films before Lilly finds success and stardom in the new medium of motion pictures and ultimately falls in love with a man whose fate could cost her everything she has worked for or help her discover her true self.

I was quite surprised by this, to be honest. I wasn't expecting to enjoy it a huge deal, but I ended up finding it to be quite gratifying and also rather provocative in certain places.

The story was interesting, if a bit miserable at times. It seemed that all of Colin's characters met some dark end by making one or two ill-advised choices at some point in their lives. I don't think any of them had a happy ending; Colin dealt all of them some extremely severe blows throughout the whole thing. A lovely little nuance about Colin's characterisation, however, is that we are given a great deal of history about them, and even in some cases a glimpse of their futures. This happened often, at times even with the most minor of characters, and I really appreciated it and as a result felt more affinity with her characters.

The historical setting of this novel was incredibly impressive. It was apparent that a staggering amount of research was put into this era by the author, and this alone gains a lot of respect from me as a reader. Colin went into extreme depth describing the political events that took place during these years, but also went to great lengths to correctly portray the despair and starvation people experienced during the First World War. She then went on to describe the glitz and glamour of the film industry in the early 20th century, which was a stark contrast to Lilly's earlier experiences.

The ending disappointed me in a big way. I don't want to spoil anything for potential readers, but I found it extremely unsatisfying and even after I turned the last page, I was still worrying about Lilly. It's quite obvious that Colin is a realist and not a romanticist like I am!

I'd definitely recommend this if you are interested in this period in history, or more specifically, the early years of cinema. Failing that, if you fancy a rags to riches, wartime tale with a romantic sub-plot thrown in, then it's a good one to try.