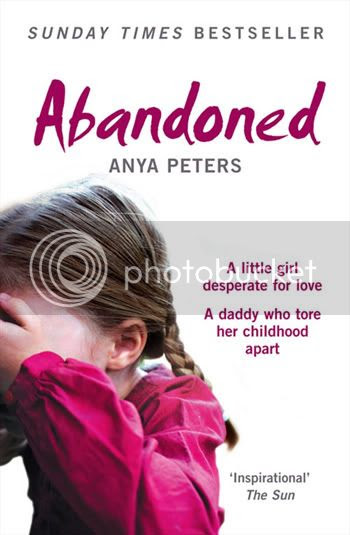 'Abandoned' is the true story of a childhood full of secrets, abuse and a little girl who didn't belong. This inspirational story is about how one woman finally overcame her traumatic childhood and adult homelessness to find a place she could call home.

This book is a true story; I didn't realise this until I had actually started to read it. I don't normally read a great deal of non-fiction, but I enjoyed this slightly more than I imagined I would have.

Anya Peters has been through some really awful times in her life, and hats off to her for being a survivor. For these reasons, I'm going to be very careful how I criticise the novel, and keep some of my opinions to myself, in fear of sounding distasteful.

The first half is extremely difficult to read and disturbing on a lot of levels. I can read about practically anything without batting an eyelid, but child abuse is a lot different. The suffering Peters was put through by her uncle is something no one should ever have to experience, especially at such a young age. The abuse scenes are extremely vivid, and made me feel a bit sick at times. It must have been terrible. I found it shocking that Peters' aunt let the abuser back into her home after he was released - and then allowed Peters to come back and live there! That is truly disgusting behaviour.

The second half of the book is about Peters escaping an abusive relationship and her subsequent homelessness as a result of this. The relationship was mostly documented in retrospect, whereas the first half of the novel happened in real time. Then we go along with Peters as she tries in vain to pull money together and find a home.

She then discovers blogging in a library, and now we have her book!

How she ever survived, I can't even begin to imagine. Many would just have given up. But Anya Peters now has a successful blog and a novel, and she has truly risen up from the dirt.

You can check out her blog at: http://wanderingscribe.blogspot.com/
Posted by JK at 10:24