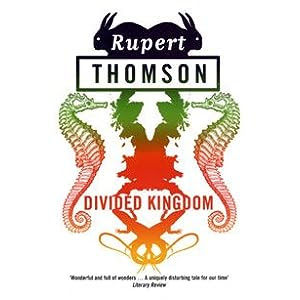 It is winter, somewhere in the United Kingdom, and an eight-year-old boy is removed from his home and family in the middle of the night. He learns that he is the victim of an extraordinary experiment. In an attempt to reform society, the government has divided the population into four groups, each representing a different personality type. The land, too, has been divided into quarters. Borders have been established, reinforced by concrete walls, armed guards and rolls of razor wire. Plunged headlong into this brave new world, the boy tries to make the best of things, unaware that ahead of him lies a truly explosive moment, a revelation that will challenge everything he believes in and will, in the end, put his very life in jeopardy.

I read Thomson's The Five Gates of Hell back in January and really enjoyed it, so I was looking forward to getting my teeth into this one. Unfortunately, I've been left feeling extremely disappointed.

It was an interesting premise to begin with - the United Kingdom being divided into four countries, and people being herded into different areas depending on their personality. I think Thomson could have done a lot with this idea, but for me it fell flat quite quickly. Although the book was set in a dystopian, alternate future, very little was given in order to deem this world plausible even in the slightest.

The main character is very two-dimensional, at times almost inhuman. He barely seems to register the ordeals he experiences, and he seems to have the emotional range of a teaspoon.

Towards the end of the novel, Thomson introduces a somewhat supernatural aspect that seems to do nothing but point to the possibility that our author was struggling to come up with a suitable ending, or was faltering in his ability to continue the tale. This plot twist does absolutely nothing to add to the novel's already poor believability, and just made me feel a bit uncomfortable and awkward.

I really wouldn't recommend this; I was looking for it to be an exciting political thriller that also delves deep into the intricacy of human nature and relationships, but instead I got a dull story of a man's decline. Also, the ending was weak and I was left feeling as though I had wasted my time. It's a shame, because I had really enjoyed The Five Gates of Hell. I'm hoping to try another of Thomson's novels in the near future, and hopefully I'll be able to reestablish my respect for his writing.