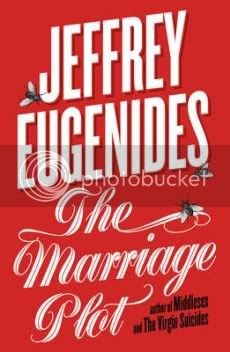 The Marriage Plot by Jeffrey Eugenides

It’s the early 1980s. In American colleges, the wised-up kids are inhaling Derrida and listening to Talking Heads. But Madeleine Hanna, dutiful English major, is writing her senior thesis on Jane Austen and George Eliot, purveyors of the marriage plot that lies at the heart of the greatest English novels. As Madeleine studies the age-old motivations of the human heart, real life, in the form of two very different guys, intervenes. Leonard Bankhead – charismatic loner and college Darwinist – suddenly turns up in a seminar, and soon Madeleine finds herself in a highly charged erotic and intellectual relationship with him. At the same time, her old friend Mitchell Grammaticus – who’s been reading Christian mysticism and generally acting strange – resurfaces, obsessed with the idea that Madeleine is destined to be his mate.

Over the next year, as the members of the triangle in this spellbinding novel graduate from college and enter the real world, events force them to reevaluate everything they have learned. Leonard and Madeleine move to a biology laboratory on Cape Cod, but can’t escape the secret responsible for Leonard’s seemingly inexhaustible energy and plunging moods. And Mitchell, traveling around the world to get Madeleine out of his mind, finds himself face-to-face with ultimate questions about the meaning of life, the existence of God, and the true nature of love.

Are the great love stories of the nineteenth century dead? Or can there be a new story, written for today and alive to the realities of feminism, sexual freedom, prenups, and divorce?

I honestly cannot describe how excited I was a few months ago when reading the above blurb. I thought this book was everything I had been looking for, everything I could ever hope to learn. I had a high opinion of Eugenides, with Middlesex being one of my favourite reads of all time. How could this one disappoint?

It began excitingly enough. I related to Madeleine so well - a girl who is in love with English Victorian and Regency novels, who falls in love with all of the wrong people, and who is entirely socially awkward and romantic. Tick, tick, tick. Then I got bored. I stopped reading, I stopped wanting to pick the book up. Nothing was happening; it was a road to nowhere, a cyclical walk through hell. These characters go on pointless typical journeys in order to 'find themselves'. I started to hate every single one of them (including Madeleine, I could no longer relate, she was so flat), and I didn't learn a thing. No morals of the stories were to be given, nothing was clear, the ending was AWFUL. I am devastated.

The entire thing was so dull that it has taken me weeks to get through. I could not gain the motivation to pick it up and start reading. I am sure one day I even vacuumed the house over reading a chapter. There was the odd streak of Eugenides brilliance, of course, but these were so few and far between that the 400 pages of fog seemed hardly worth it. The tangents Eugenides goes off on were ridiculous! The ins and outs of molecular behaviour of yeast! Quite the thing! This book was terrible.

I would love to sit here and delve into the ironies, subtexts and real meanings of this novel in order to understand it more clearly, but to be perfectly honest I have had quite enough of it. It was a massive disappointment after Middlesex, and it really will make me think twice about buying another Eugenides book (that is, if he writes another one after all of the God-awful reviews on this shambolic work). It may be worth a re-read in a year or so, but for now I'd really like to forget all about it. Infuriating.

(My apologies to those who were looking forward to this review, particularly Ingrid – sorry, petal)

Oh, oh I forgot come back and comment having read this. My first book I've read by him so here's hoping I like Middlesex as much as everyone else seems to. This was a lengthy for no reason slog of a book, totally agree with you on the tangents.

Don't know if you've read Freedom by Franzen but it covers similar things but in a more effective way, I read it before The Marriage Plot and couldn't help but compare them. I mean, if this was someone's first novel it would never be in print!