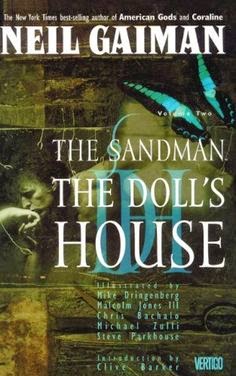 The Sandman: The Doll's House by Neil Gaiman

After a decades-long imprisonment, the Sandman has returned to find that a few dreams and nightmares have escaped to reality. Looking to recapture his lost possessions, Morpheus ventures to the human plane only to learn that a woman named Rose Walker has inadvertently become a dream vortex and threatens to rip apart his world. Now as Morpheus takes on the last escaped nightmare at a serial killers convention, the Lord of Dreams must mercilessly murder Rose or risk the destruction of his entire kingdom.

In volume two, the series becomes more impactful in its confidence and meaning. We begin with ancient tale of Dream falling in love with a mortal - the stuff of Greek legend - and witness the destruction this reaps. This displayed clearly just how Endless Dream and his family really are, ruling since forgotten times. Most of all, Dream's weakness for mortals is displayed here, and read like a hint of things to come. The volume follows a similar path to its predecessor - where in volume one, Dream had to locate his totems which were stolen from him, in this volume he returns to his kingdom to find some of his dreams and nightmares have escaped, and he sets out to locate them.

Gaiman's characterisation in this volume is much more rich than in the previous one. The vortex, Rose, moves into the 'doll's house' with a host of strange characters, and Gaiman uses their dreamscapes to explain their past and present to us. We visit a serial killer convention, and the stories of these characters are incredible, with Gaiman's brilliance seeping out of each of them. We are introduced to a gentleman in a pub who is rejecting death completely and claiming it's for the weaker man. Dream speaks to him, and offers to meet him in the same pub in one hundred years' time. We travel through time with both of them, and watch them both develop as they meet in the same spot every hundred years. Absolutely glorious.

I'm still absorbed in the idea that Dream has six brothers and sisters, and I'm excited to meet them all. We had a brief introduction to Desire and Despair in this installment, and they both seemed deliciously abhorrent.

There were no allusions to DC characters in this one, Justice League or otherwise, and I must admit I preferred it this way.

A wonderful read, with the twisted darkness of Gaiman still very much shining through. He takes a mythical  structure and moulds it into his own fantastic realm. On to volume three.
Posted by JK at 10:44