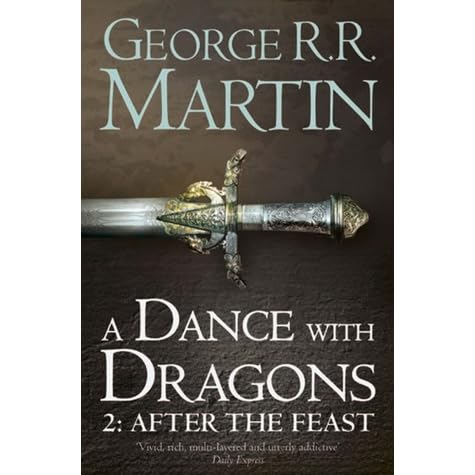 A Dance With Dragons II: After the Feast by George R.R. Martin


The future of the Seven Kingdoms hangs in the balance.


In King’s Landing the Queen Regent, Cersei Lannister, awaits trial, abandoned by all those she trusted; while in the eastern city of Yunkai her brother Tyrion has been sold as a slave. From the Wall, having left his wife and the Red Priestess Melisandre under the protection of Jon Snow, Stannis Baratheon marches south to confront the Boltons at Winterfell. But beyond the Wall the wildling armies are massing for an assault…


On all sides bitter conflicts are reigniting, played out by a grand cast of outlaws and priests, soldiers and skinchangers, nobles and slaves. The tides of destiny will inevitably lead to the greatest dance of all.

I thought this series was going to take me months to conquer, but rattling through seven mammoth novels in seven weeks is just testament to Martin’s skill. His pace, his tension, and his maddening plotlines have quickened my reading speed and my heart, and have led me to forego less important elements in my life, such as family, friends, and keeping my house clean. Maybe now I can return to some shadow of normality.

In the beginning, I was completely overwhelmed by this complex saga; now, I find myself an expert on hundreds of characters, main players or otherwise, their motivations, their relationships to each other, their vendettas, their love. It’s still overwhelming, but I feel so close to it, so fidgety to know the rest of their stories.

The final volume was far more engaging than some of its wandering predecessors; I smashed it in mere days. Some sections involved deliciously murderous, knuckle-biting, badass types of shockery, and I was living for it all.

Fire and blood, snow and swords, corpses, sorcerers, traitors, turncloaks – I have relished them throughout this journey. The foreshadowing, the symbols; so delectable that I believe I’m shock it’s all over (for now).  The best of all in this series is that there is no battle between good and evil. Everyone we meet is twisted, everyone is out to achieve their own gain, and the most delicious part is understanding why. Honour, vengeance, coin, faith, pride – whichever it was, Martin made us both love and hate his characters in equal measure. It seemed no one was above slicing a few guts out to advance – and it was gorgeous.

One complaint: if someone said “as useless as nipples on a breastplate” one more time, I was going to scream. How can everyone in this novel, no matter where they originate from, or which demographic they represent, have the same patter?

Now I join the other fans in waiting for Winds of Winter. Sources suggest this has been in the making for eight years already, so I can only hope I don’t have too long to wonder what’s happening in Westeros. Eight years, though – GRRM, get off your arse.