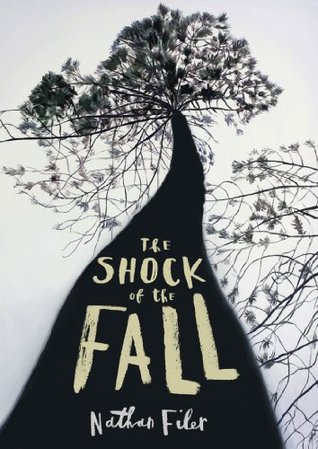 The Shock of the Fall by Nathan Filer

What begins as the story of a lost boy turns into a story of a brave man yearning to understand what happened that night, in the years since, and to his very person.
While on vacation with their parents, Matthew Homes and his older brother snuck out in the middle of the night. Only Matthew came home safely. Ten years later, Matthew tells us, he has found a way to bring his brother back.


This is a devastating novel. I’ve come away with strange feelings of melancholy, grief, and hope.

Matthew writes the story of his life to date. His brother, Simon, died some years before, when both of them are young boys. The cause of Simon’s death isn’t fully explored until later in the novel, but remains as a lingering shadow over Matthew, his family, and his words themselves.

The plot details Matthew’s struggles with schizophrenia (“a disease with the shape and sound of a snake”), and Filer shows us how this affects him. It reminded me very much of Haddon’s Curious Incident and Russell’s Wrong Boy, in that I was devoted to the storyteller and his attempts to battle through what he’s been given.

Written mostly in a stream of consciousness style, we’re able to relate and sympathise with Matthew’s feelings of hopelessness, blame, and misunderstanding. Matthew will tell his story sporadically, dashing off on tangents to explain something which happened in the past, adding in additional descriptive commentary when he feels there’s something we should know. It’s exactly like hearing a story from someone’s mouth. Filer uses different fonts and pictures throughout to really instil the various problems of mental illness in the reader’s mind.

Filer subtly hints at the flaws within mental health institutions, and depicts the horror within from Matthew’s point of view. Patients (or service users) experience a controlled, regimented lifestyle peppered with consequences should they choose to behave or react in a certain way. It’s really, really bleak and heartbreaking to see people treated as less than people purely due to an illness.

I’m finding it difficult to convey exactly why I loved this novel so much. I wanted to write an excellent review, but I can’t seem to find the words - I usually find it’s the best novels which don’t allow me to put my feelings into work. But, to the best of my ability, it’s Matthew’s words, it’s the way in which they’re presented, it’s his family, his pain, his guilt. Everything feels so real, so real, so honest. It truly is a beautiful work.
Posted by JK at 20:54

Wonderful article, Which you have shared here about the Book. Your article very interesting and I really enjoyed reading it. I am thankful to you for sharing this article here. Second Hand Books for Sale India

This article gives the light in which we can observe the reality. This is very nice one and gives in depth information novel. Thanks for sharing this informative content .


This is very nice one and gives in depth information novel. I suggest you to read this novel return of the female knight its amazing. Thanks for sharing this informative content.