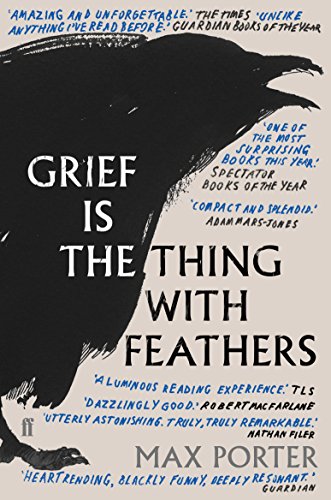 Grief is the Thing with Feathers by Max Porter

In a London flat, two young boys face the unbearable sadness of their mother's sudden death. Their father, a Ted Hughes scholar and scruffy romantic, imagines a future of well-meaning visitors and emptiness.
In this moment of despair they are visited by Crow - antagonist, trickster, healer, babysitter. This self-described sentimental bird is attracted to the grieving family and threatens to stay until they no longer need him. As weeks turn to months and physical pain of loss gives way to memories, this little unit of three begin to heal.


A father and his two sons lose their wife and mother. A crow arrives to guide them through the initial stages of the grieving process. What follows is a beautiful yet heartbreaking view into their lives after the loss, the processing, the hope, the memory. I was captivated.

Although taking the form of a novella, this felt very much like a toe in the waters of poetry. There were some really gorgeous lyrical moments, alongside some very clever and impactful prose. Porter’s skill is glorious, and unmistakable on every page. The pain and confusion of grief is depicted all too well, and yet in such a rare way that it feels unfamiliar and raw.

The narrative is split into three voices - Dad, Boys, Crow. This allows us to see the different ways in which Dad and the boys are coping with their grief - the kids buoyant, Dad numb - and Crow’s cryptic interpretations on their progress and current states. It allows for empathy, allows us to grieve alongside them, and allows us to also struggle.

I imagine one could take more from this having read Ted Hughes’ Crow; I haven’t. Yet Crow seems perfect here to an amateur, as though no other bird could do. We couldn’t have a robin, a dove, a peacock. Crow’s darkness and vulgarity can cast him in only one feathered form.

I missed her so much that I wanted to build a hundred-foot memorial to her with my bare hands. I wanted to see her sitting in a vast stone chair in Hyde Park, enjoying her view. Everybody passing could comprehend how much I miss her. How physical my missing is. I miss her so much it is a vast golden prince, a concert hall, a thousand trees, a lake, nine thousand buses, a million cars, twenty million birds and more. The whole city is my missing her.