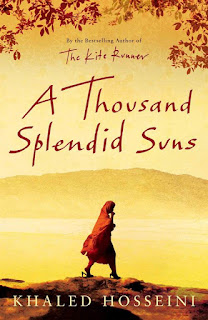 Mariam is only fifteen when she is sent to Kabul to marry the troubled and bitter Rasheed, who is thirty years her senior. Nearly two decades later, in a climate of growing unrest, tragedy strikes fifteen-year-old Laila, who must leave her home and join Mariam's unhappy household. Laila and Mariam are to find consolation in each other, their friendship to grow as deep as the bond between sisters, as strong as the ties between mother and daughter. With the passing of time comes Taliban rule over Afghanistan, the streets of Kabul loud with the sound of gunfire and bombs, life a desperate struggle against starvation, brutality and fear, the women's endurance tested beyond their worst imaginings. Yet love can move a person to act in unexpected ways, lead them to overcome the most daunting obstacles with a startling heroism. In the end it is love that triumphs over death and destruction.


This book is nothing less than a masterpiece. It tells the tale of Afghanistan through the Civil war era, moving into the rule of the Taliban, and I had heard the story was brutal, depressing, and filled with doom and destruction. It really was all of those things, of course it was, but there was a stronger message prevailing throughout the entire story - the power of hope, love, and human spirit.

The subject matter was engrossing. I'll admit I have very limited knowledge of Middle Eastern culture, and this was a real eye-opener. Afghanistan is a place I've heard of so often since 2001, but have known very little about. I would hazard a guess that I’m not the only one. Reading of their wars, religion, classes and gender disparities was absolutely captivating to me, and I became very ashamed very quickly of my lack of knowledge. It is difficult to absorb the fact that some of the scenes in the book which shocked me a great deal are really just 'the norm' over there. It's a sickening thought.

Our two strong protagonists, Mariam and Laila, are born fifteen years apart, but find themselves both married to the same scumbag due to a series of tragedies. The way these women come together to help each other through some horrific ordeals is inspiring to a huge degree. Their lives turn into an incredibly emotional journey, and Hosseini's writing is so magical that he picks you up and brings you along on the journey with them. I was SO emotionally invested in both of these women. I loved them, and I cried like a baby at their hardships.

The characterisation is absolutely perfect. Not only was I head over heels in love with Mariam and Laila, keeping my fingers crossed for them and hoping them through each page, Hosseini managed to get right into my stomach and generate one of the largest balls of contempt I have ever had for a fictional character. Rasheed, Mariam and Laila's husband, is without a doubt one of the most abhorrent characters I have ever come across. I hated him as soon as I was introduced to him, and (without spoiling anything) I cried with relief at retribution time.

Hosseini really shows us here how much a human being can endure. Mariam and Laila take so many blows (both physical and emotional) and they survive, they press on despite the pain and loss - a true fight against the odds, and the power of having hope in hopeless times. It's a gorgeous message, but one I couldn't possibly attempt to describe without pointing you towards the book. It is wonderful.

I would urge anyone to read this book; I even began to do so before I had finished. It is a beautiful, heart-breaking, and haunting account of life in a place very few of us are familiar with. It is not easy to read - I was breaking my heart on several occasions - but it is worth every single tear. It is absolutely terrific and I am sure it will become a classic. Please, please, please (if you trust my literary judgement) source a copy of this and have your heart blown away.
Posted by JK at 19:53