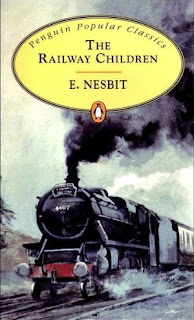 The Railway Children by E. Nesbit

When Father goes away with two strangers one evening, the lives of Roberta, Peter and Phyllis are shattered. They and their mother have to move from their comfortable London home to go and live in a simple country cottage, where Mother writes books to make ends meet. However, they soon come to love the railway that runs near their cottage, and they make a habit of waving to the Old Gentleman who rides on it. They befriend the porter, Perks, and through him learn railway lore and much else. They have many adventures, and when they save a train from disaster, they are helped by the Old Gentleman to solve the mystery of their father's disappearance, and the family is happily reunited.

There really is nothing better than a quaint little children's classic. The Railway Children ticks all the Victorian boxes for me; well-mannered, polite, creative, and intelligent little children getting themselves into adventures and consistently coming out the other end as heroes. It's wonderful; especially when you compare these wee scamps to the kids we are confronted with today.

This book was first published in the early 1900s, and I think that's what I love about it most. The children's home has no electricity whatsoever, and they are absolutely fascinated by their railway and the ways in which the trains work. It is honestly adorable.

The novel's great mystery is why the children’s' father was taken away mysteriously one night, forcing them to subsequently move from their elegant mansion to a smaller home in the country. I realise this is a children's novel, but it doesn't take a genius to work out where he is (after we're told he isn't dead, that is). I remember even as a ten year old I had it all worked out; but I was ten in 1997, and it was a big bad world even then. Perhaps if I was ten in 1907 I wouldn't have realised Daddy had gone to prison.

As an older cynic, I felt this time that the children’s' little adventures seemed slightly far-fetched. They saved a baby (and a dog) from a burning boat, ripped up their red petticoats and waved them at a train so it wouldn't crash, helped a Russian immigrant find his wife and family, and saved a poor boy that was stupid enough to run into a railway tunnel and break his leg. They just seemed too brilliant for words. When I was younger, I thought this was wonderful and that they must be excellent people, but the stories were so far-fetched it became quite unbelievable. I will say, though, that without Nesbit characterising them as having such lovely little attitudes, the plot would have failed entirely.

Despite the above, I loved Nesbit's writing, particularly what she was hinting at. Without condescending in the slightest, she teaches lessons about absent parents, the wrongly accused, justice, charity, and the benefits of playing the hero. We see the adult world from a distance, but it's still a bit too close for comfort.

Lastly, I loved that the children were allowed their freedom. Play in a railway station? Walk about in tunnels? Fall in a canal? Talk to strangers? Oh, go on then. It's lovely and a breath of fresh air in our scare mongered culture of 2012. Let's keep the kids indoors, though. It's scary out there, anything could happen; and nothing will hurt them if they're just sitting on their arses eating crisps.