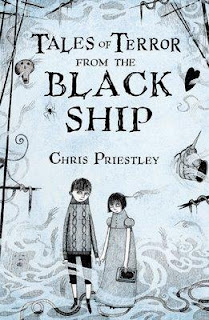 Tales of Terror from the Black Ship by Chris Priestley

At the Old Inn, which clings precariously to a cliff top above a storm-lashed ocean, two sick children are left alone while their father fetches the doctor. Then a visitor comes begging for shelter, and so begins a long night of storytelling, in which young Ethan and Cathy, who have an unnatural appetite for stories of a macabre persuasion, sit out the last throes of the storm in the company of a sailor with more than enough grisly tales to satisfy them. But something about this sailor puts Ethan on edge, and he becomes increasingly agitated for his father's return. Only when the storm blows itself out can Ethan relax - but not for long, for the new dawn opens the children's eyes to a truth more shocking, more distressing than anything they heard the night before.


After reading Priestley's Uncle Montague's Tales of Terror, I was thirsty for another scare, and borrowed Tales of Terror from the Black Ship from a friend. As stated in my previous Priestley review, I am very easily scared, and Black Ship was no exception. Having finished the last chapter only a short time ago, I'm still finding myself peering over my shoulder as I type.  What a collection of stories this is! Each one told by a strangely dressed sea-faring gentlemen who knocks the door of two ill children during a storm. It's soon apparent that there's something not quite right about this man, and the chilling backdrop of strong weather did nothing to calm my nerves. This, coupled with the fact that the children's father had gone off to fetch the doctor, meaning no grown ups, made me very nervous indeed.  Although I realised quite quickly the sailor's secret, I was still bloody terrified, and can imagine how fascinated a younger person would be by these tales. They are absolutely haunting, and at times unfathomable, but all the while entirely delicious.


The format is the same as Uncle Montague; lots of short stories which could stand alone, but which all add up to something bigger, something more macabre, a formidable twist in the tale. The stories tend to be cut off suddenly after a plot twist, and this sort of sudden death is absolutely delectable. This may be a spoiler (avert your eyes), but I adored Uncle M making a very subtle appearance at the end.

Other than Treasure Island, I can't admit to reading any sea-faring novels, and this is probably why I was so disturbed. I can't think of anything worse than the sea raising over my head, or being on a ship in a bare expanse of ocean with nowhere to escape to. Thank goodness I'm landlocked.

Priestley's prose is gorgeous, yet again, however I feel some sentences may be quite challenging for younger, more reluctant readers. The stories themselves are incredibly gripping, however, so it's well worth giving it a try. If you need any more encouragement, see Chris Priestley scaring me below: 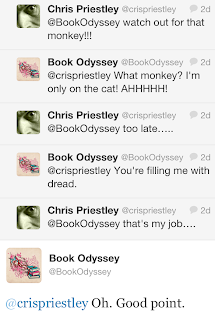 Haunted, and entirely unsettled, I now move on to Tales of Terror from the Tunnel's Mouth.
Posted by JK at 19:48