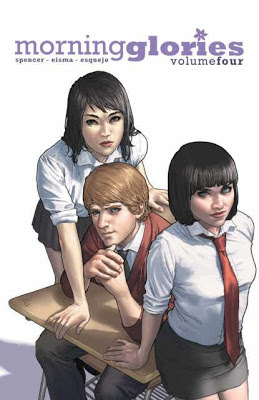 
Still reeling from the climactic events of "P.E.," the Glories find themselves lost in time and space, confronted by a new group of students who might be even more dangerous than the faculty themselves - the truants!

Volume four is the plateau for me. After three very exciting installments to this story, the fourth is nothing more than a mindfuck. Don't get me wrong, maybe those of you with higher brainpower than me would understand it more, maybe the break between reading the volumes didn't help, but this one was so incredibly confusing and nonsensical. Still, no questions are answered, more are asked, and we are thrown into a whirlwind of time travel, brain-feeling ghosts, now you see me madness. I'm frustrated.

The range of characters keeps getting bigger and bigger, making it more difficult to lose track. I was enjoying getting to know our core characters in more depth, but after the introduction of the truants, our originals have blurred into the background somewhat. There are some new characters who look similar enough to be twins (such as Akiko and Irina), but are in no way related to each other, meaning to have to keep your wits about you as scenes cut into each other quickly.

Maybe my expectations were just set too high. I didn't feel there was as much excitement as volumes two and three, only sheer confusion. I will absolutely read volume five as I need some sort of closure on this, but at the moment I feel as though my brain has been put in the microwave.

Yeah, reading comics in trade format can be like that sometimes. Storylines aren't always complete in the trade format because the book is written to fit the monthly issue format.

Treat it like a tv drama. If there's 30 episodes in a season and you're buying DVDs that only have five episodes each instead of a boxset, the story's gonna be chopped up into a selection that doesn't necessarily contain a proper three act structure.

Obviously, not having read this series I can't confirm it in this instance, but if you stick with it and get the series as a whole it'll be worth it and be much less frustrating.