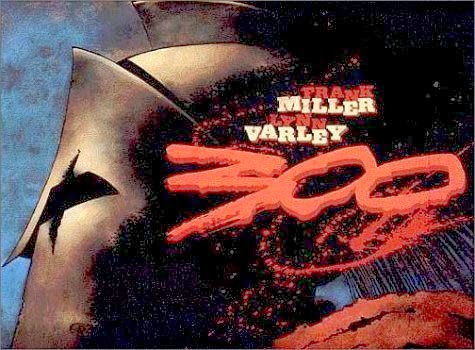 The army of Persia - a force so vast it shakes the earth with its march - is poised to crush Greece, an island of reason and freedom in a sea of mysticism and tyranny. Standing between Greece and this tidal wave of destruction is a tiny detachment of but three hundred warriors. But these warriors are more than men… they are Spartans.


I found this absolutely beautiful. Dark, broody, gritty and gory, but visually spectacular; I don't think I was fully prepared for how much I was going to love it. Graphic novels aren't my forte as such, and so I doubt I can do justice to this in my review, however I really did love it.

The words to pictures ratio here is very much in favour of the aesthetics. Being a person who appreciates words more than anything, I found this difficult to begin with, but quickly adapted to what really mattered. The drawings were excellent, the colours rich and fitting, and the pace of the story was hugely directed by the drawings themselves (with a bit of help from our good old words). The pictures command you look at them, take them in, and really live with the Spartans. The book is a brilliant size and shape, too; huge landscape pages that really work well with the panels.

With the words being sparse, there is very little in the way of character depth or development, excepting the story of King Leonidas' childhood. The story is told by a surviving Spartan to his fellow countrymen, to instil passion into the ensuing battle for revenge. This allows the book to move away from being a novel as such, to being a parable illustrating the importance of glory, honour, patriotism, and loyalty.

I found this an absolutely beautiful portrayal of the 300 Spartans. It's a wonderful war story, by no means historically accurate, but a fascinating work of fiction.
Posted by JK at 20:36