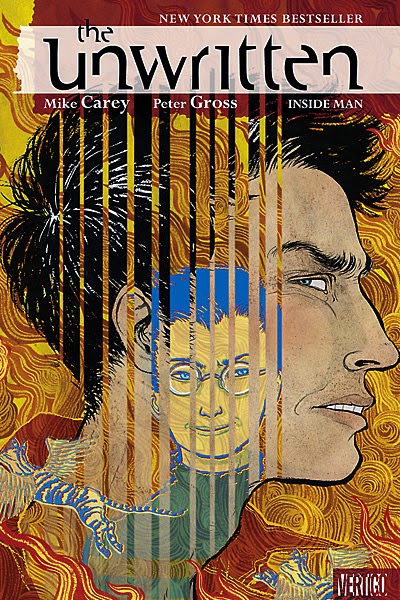 The Unwritten: Inside Man by Mike Carey & Peter Gross

In this volume, Tom arrives at Donostia prison in Southern France and falls into the orbit of another story: The Song of Roland. Unfortunately for Tom, it's a story that ends with a massacre. .Tom discovers the true meaning of "out of the frying pan" after his escape from Donostia jail takes him to Stuttgart in 1940, a ghost city inhabited by the master liar of the Third Reich, Josef Goebbels, and a tortured soul who's crying out for rescue - or death...

I love that this is all about the power of storytelling over reality; stories shape the world. I liked the artwork; in particular the mixed way of construing the media in different formats to enable the story to be told. Although the Tommy Taylor series is hugely akin to Harry Potter, this allows the reader to understand the obsession surrounding Tom and his father's work. Carey seems to have a vein of satire running through his commentary on the public's obsession with these novels, and although I am absolutely a part of the Harry Potter fan world, I totally get it.

Tom is a strong character, but I haven't warmed to him yet. He reminds me of many stubborn, arsehole men I have met in my life; those who will listen to anything but reason, and believe they know best. Tom knows nothing, and won't let anyone fix this for him. Thankfully, he begins to come to his senses in this volume, just not enough to make me like him.

The last issue of the volume focuses on Mr Bun, a foul mouthed rabbit living with other (much more polite) animals in a Beatrix Potter-like forest. Mr Bun's sole intention is to kill his creator, presumably the author, and he mentions Wilson Taylor's name a few times, implying that he has been put there by the author. This fascinated me, and I hoped it was to foreshadow something we are yet to find out about. Imagine being able to write your worst enemies into a novel, and for that novel to become real. Imagine turning the most cretinous person you know into a fluffy bunny, and sending them into the Hundred Acre Wood. Absolutely wonderful.