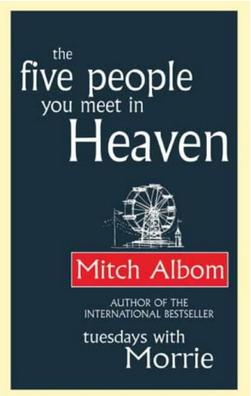 The Five People You Meet in Heaven by Mitch Albom

Eddie is a wounded war veteran, an old man who has lived, in his mind, an uninspired life. His job is fixing rides at a seaside amusement park. On his 83rd birthday, a tragic accident kills him as he tries to save a little girl from a falling cart. He awakes in the afterlife, where he learns that heaven is not a destination, but an answer.

In heaven, five people explain your life to you. Some you knew, others may have been strangers. One by one, from childhood to soldier to old age, Eddie's five people revisit their connections to him on earth, illuminating the mysteries of his "meaningless" life, and revealing the haunting secret behind the eternal question: "Why was I here?"

(If you'd like to read a review of this novel which isn't crippled with emotion, you can do so here)

This is one of my favourite novels, and I was moved to pick it up again after the loss of my grandma. She is one of my best friends and I'm still struggling with this loss. I believed the story and its ideas could help me with my grieving process, as I'm finding it difficult to get my head around what's happening to her now. I often find myself saying "Where are you?" out loud, and not being able to sleep at night because I want to know she's okay. There is no defined art to mourning, I know, but I felt the words could help me.


Albom suggests that before you get to heaven, you meet five people who explain your place in life. They answer all of the questions that have gone unanswered in your life; why you were there, what you meant to people, and the reasons behind your pain and suffering. After this point, once you've been enlightened and understand your place, you choose your own heaven, and wait for the person whose life you are destined to explain. This is an undoubtedly gorgeous idea, and I hope whoever my grandma's five people are, at least one of them explained her reason for living was to have such a positive impact on my life, to be one of the only people brave enough to tell me the absolute truth, and to show me what being a strong woman is really all about. After this point, I know she'll be waiting for me in the biggest shopping centre in the sky.

I'm not a religious person, but I'm open to suggestions. My grandma was a devout Catholic, so I know she'll be looked after by her Lord. Maybe the afterlife isn't how Albom paints it, but what if it is? Who are your five? Probably not who you'd expect, but one of them might be who you'd hope to see.

Although, yes, the book did what I thought it would and helped me focus on something (however fictional) that could have happened to her after she passed, it has broken my heart again in a thousand different ways. It was too soon, too close to the bone; Eddie's love for his wife who passed before him was a hot spike in my heart. It was all too familiar, and a devastating sting. I suppose extra sobs never really hurt when you miss someone, though.
Posted by JK at 12:15