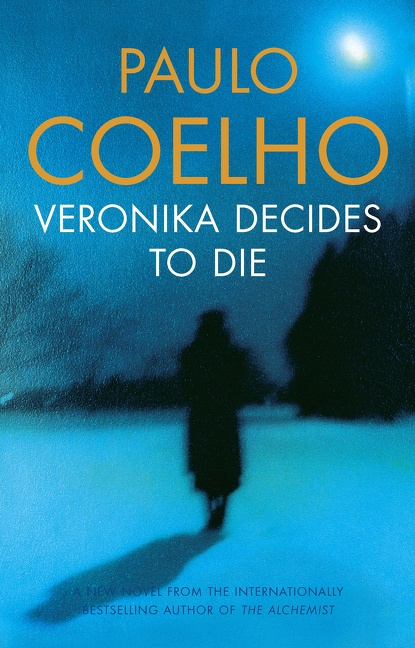 Veronika has everythng she could wish for - young and pretty, with plenty of attractive boyfriends, a steady job, a loving family. Yet Veronika is not happy and one winter's morning she takes an overdose of sleeping pills, only to wake up some time later in the local hospital. There she is told that her heart is now irreparably damaged and she has only a few days to live.

Having read two Coelho novels in the past (The Witch of Portobello and The Alchemist), and having loathed both of them, I moved on to this one with trepidation and a slight contempt. Unfortunately some years ago, having heard lots of good things about Coelho, I bought five of his novels, of which this is only number three, so we have a lot of trepidation and contempt to go through yet. Don't listen to other people, kids.

Veronika Decides to Die has been my favourite so far, although favourite is perhaps a strong word to use for a novel that's only slightly more palatable than the other two I've experienced.

Our wonderful narrator decides life isn't worth living because one day she'll grow old (and lose her looks - bear this in mind, we'll come to it later) and also because there are a number of problems in the world which she can't be bothered with. She swallows a load of sleeping pills, and whilst waiting for them to work, strokes her cat, waves at men out of her window, and writes a letter to a Slovenian newspaper to make them aware her suicide is because no one knows anything about Slovenia. Truly poetic. She wakes up in hospital to be advised she's caused irreparable damage to her heart, and she'll die in the next few days. So begins her journey of enlightenment as she learns (you guessed it) to love life and regret her decision to die.

The only idea I truly connected with in the novel was that within the walls of the mental hospital, the inmates could express their true desires, and behave however they felt they should. Coelho explains that the idea of normality is a social construct, so behaving in a way which is deemed to be outwith the norm (madly) is, in fact, the norm within the realms of an institution.

I had a real issue with Coelho's use of Veronika's good looks as a reason for her not to commit suicide. He almost made it sound as though living and being any less than beautiful were mutually exclusive. Characters would comment, "Oh but you're beautiful! Why would you want to die?" as though having a gorgeous face and being able to get any gormless male into bed is truly worth living for (it isn't). Even the blurb on the back of the book begins by saying, Veronika has everything she could wish for - young and pretty, with plenty of attractive boyfriends.. I'm sorry, this is absolute shit. Gee whiz, I'm pretty, better not take those sleeping pills so I can bestow my beauty on the world? Fuck off, Coelho.

My other real irritant here was Coelho writing himself into the beginning of the novel as a cameo appearance in order to make us aware he used to work in a mental institution so he really knows what he's talking about. This was nothing more than superfluous and completely unnecessary. I don't remember Ken Kesey ever doing that.

Preachy, plotless and patronising, it's philosophy for gullible idiots.
Posted by JK at 14:10