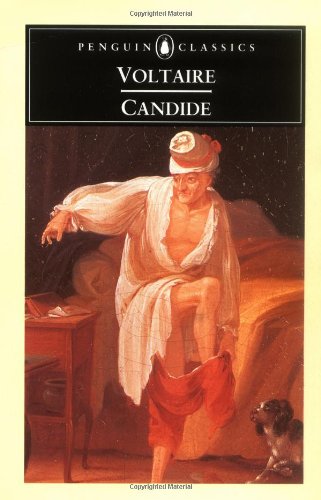 Brought up in the household of a powerful Baron, Candide is an open-minded young man, whose tutor, Pangloss, has instilled in him the belief that 'all is for the best'. But when his love for the Baron's rosy-cheeked daughter is discovered, Candide is cast out to make his own way in the world.
And so he and his various companions begin a breathless tour of Europe, South America and Asia, as an outrageous series of disasters befall them - earthquakes, syphilis, a brush with the Inquisition, murder - sorely testing the young hero's optimism.

A gorgeous tale on the strength of optimism, Voltaire satirises both the inherently optimistic, and the irrevocable pessimistic, in all of us.

Candide is a naive wee chap. Having been taught that everything in this world is for the best, and having never been allowed access to the world to form his own opinions, not to mention make his own decisions, he is cast out of his household and forced into both of these. The series of events which follow are sent to test his borrowed philosophy. He's an incredibly bland fool; easily taken in, and incapable of any sort of subtlety or discretion.

Every single character experiences some sort of physical or mental torment, many experience a multitude of these. Voltaire shows us a world which is evil to the extreme, and show us how this knocks Candide's belief in the hopeful and promising philosophies he had been taught. Each of these harrowing moments are cast in a comical light, and this brings entertainment to our understanding. Amongst murder, rape, torture, natural disaster, and prostitution, only once does Voltaire lack humour in his telling of human misery, and that's when he shows us slavery. This felt utterly profound and quite telling of his views on that matter alone.

In Pangloss and Martin, Voltaire juxtaposes an extreme optimist with an extreme pessimist, yet allows us to realise that neither is the epitome of perfection, nor do their lives follow sensible, or peaceful courses. Voltaire shows us that neither of these beliefs are admirable, or even desirable, as he attempts to prod these two into revoking their reasoning.

Although inconceivably far-fetched at times, the nonsense works well to enforce Voltaire's point. Misery is living in every possible place, even within us, and this can almost always be traced back to the blackness of the human soul. Yet, we live on, we desire to live on, in a world where happiness can never be a constant.