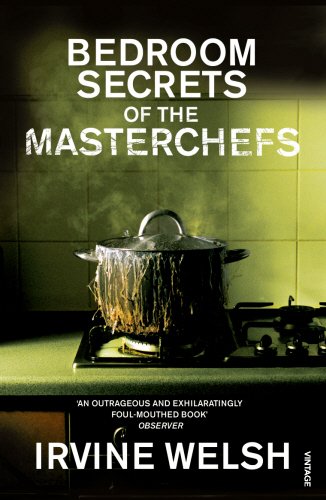 Bedroom Secrets of the Masterchefs by Irvine Welsh

At Edinburgh's Department of Environmental Health, hard-drinking, womanising officer Danny Skinner wants to uncover secrets: 'the bedroom secrets of the master chefs', secrets he believes might just help him understand his self-destructive impulses. But the arrival of the virginal, model-railway enthusiast Brian Kibby at the department provokes an uncharacteristic response in Skinner, and threatens to throw his mission off course. Consumed by loathing for his nemesis, Skinner enacts a curse, and when Kibby contracts a horrific and debilitating mystery virus, Skinner understands that their destinies are supernaturally bound, and he is faced with a terrible dilemma.


The male psyche is a complex thing. In the never-ending battle to become the alpha, men beat their chests in an attempt to not only establish dominance over their brothers, but to commit the most humiliating act possible - embarrass them in front of the burds. In this way, rivalries are created and nurtured, and Welsh shows us in Bedroom Secrets how poisonous this rivalry can truly be.

Danny Skinner is a pretty standard Welsh character, with flashes of Bruce Robertson and Sick Boy peeping through the cracks. Through booze benders, and his love of being a part-time football casual, we begin to understand his motivations.

When mummy’s boy Brian Kibby arrives for his first day in Skinner’s work, something malicious takes root in Skinner’s mind - a hatred for which he can’t locate the source. Kibby is a hillwalker, a train-set collector, and a total geek. He struggles talking to women, his shyness holds him back in the office. There is nothing about Kibby for Skinner to feel threatened by, yet this unfathomable hatred takes root, and Skinner unknowingly casts a curse upon him which will link them inexplicably in the future.

Welsh uses these two men to show us the horrors of this type of hatred, the similarities between them which we hadn’t quite clicked on to initially, and explores the differences in family situations. One man has grown up a product of a single parent family, and the other in a much-coveted standard mum, dad, and kids outfit. But, do either of these upbringings have any sort of effect on their moral compass? Or are you just your da’s bairn?

None of the characters here have anything redeeming about them, and that is one of Welsh’s skills. Everyone here has their skin peeled back for us to see the maggots underneath, and I love it.

I also particularly enjoyed Skinner’s jaunt to America, where I saw him become a better person. Is there something about living here amongst the grey, dreich, depressing buildings, the closed off, miserable people, and the complete lack of vitamin D, that drives us all to drink? Doesn’t take a genius.

Although I’ll admit there are far better Welsh novels, this is still a wee underrated gem. You’ve got your flawed characters, you’ve got a good bit of violence, and you’ve got the booze. Fucking party.