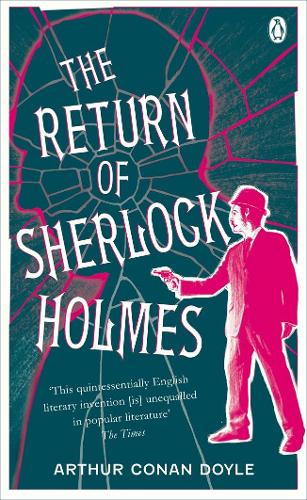 The Return of Sherlock Holmes by Sir Arthur Conan Doyle

Missing, presumed dead, for three years, Sherlock Holmes returns triumphantly to his dear companion Dr Watson. And not before time! London has never been in more need of his extraordinary services: a murderous individual with an air gun stalks the city.
Among thirteen further brilliant tales of mystery, detection and deduction, Sherlock Holmes investigates the problem of the Norwood Builder, deciphers the message of the Dancing Men, and cracks the case of the Six Napoleons.

This collection of short mysteries takes place three years after Holmes’ catastrophic and monumental ‘death’. It’s fascinating to read of the public’s reaction to this at the time, which no doubt led to Doyle’s resurrection of the great detective. Despite my gratitude at his death being nothing but a clever ruse (what else could it be?) these short stories left me longing for another full length adventure with Holmes and Watson.

There’s definitely a formula being followed here, and although it’s noticeable, it isn’t particularly tiresome. Each case brings its own suspicious characters, inconsequential clues, and mind-blowing solutions. There’s a clever way of weaving which makes part of the outcome easy to predict, and yet the final deduction is something our own minds can never parallel. It really is no wonder these stories can stand the test of time, and I’ll never cease to be amazed at how impressive they still are all these years later.

Although not the best of the collection – perhaps Doyle lost a bit of his mojo after only bringing Holmes back on the basis of demand – it still holds everything we already know and love about this pair. As stated above, I am more than ready for a longer mystery, and my next foray with Holmes will be in The Valley of Fear.