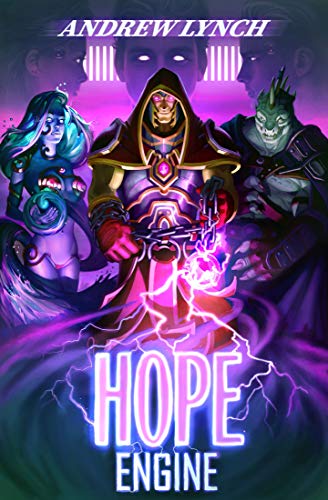 A world on the brink of war, absent parents, and no friends sounds like a disaster unless all you ever wanted was to live inside your virtual reality pod.
Meet Severo, a fresh-eyed graduate, as he joins the ranks of new players in the HOPE engine, but quickly finds out that everything isn’t as advertised. An unnatural enemy is rising, more glitch than feature, that not even the highest level players can stop. A noob like Severo doesn’t stand a chance! Right?But with his starter village in the enemy’s warpath, he better figure something out! Before that, he needs to learn that NPCs are sentient, friends are needed, and food in fantasy games sucks! Oh yeah, and pick a class!
As if all that wasn’t enough to worry about, outside of the VR pod, real life is starting to have its own technical difficulties.

Deep in a strange dystopian future, wars have been won with video games. People climb into virtual reality pods and lose themselves in a digital fantasy world. Be who you wanna be, kill who you wanna kill, meet other players from all over the globe - hey, the game translates language - and level up to become the greatest of your class.

Lynch builds an excellent world here, one which will be entirely familiar to gamers. He minutely describes the mechanics of the game; stats, loot, levelling, melee, minions, village crafting, NPCs - the lot. Lynch knows his stuff here, and immerses us flawlessly into the fantasy gameplay.

I found the plot itself to be slightly confusing and jarring. There were lots of interesting elements introduced and only partially explored, with Lynch seeming to prefer paying attention to the intricacies of battle and the mechanics of the game. This meant there was a lack of care in developing characters and relationships, and I felt I needed a little more guidance through the plot.

The twist in the tale was incredibly clever, but explored fairly loosely. It could be that Lynch is saving his explanations for the sequel, but there definitely could have been some more detail and foreshadowing around this, as it felt a bit shoehorned.

With that being said, I enjoyed the read, and was intrigued by Lynch’s originality. An excellent read for gamers.