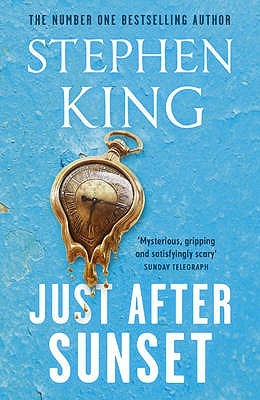 Just After Sunset by Stephen King

Just after sunset—call it dusk; call it twilight; it’s a time when human life takes on an unnatural cast, when nothing is quite as it appears, when the imagination begins to reach for shadows as they dissipate to darkness and living daylight can be scared right out of you.

As I come to expect now with King stories, these were entirely hit or miss.

In some, he wonderfully explored the human psyche when faced with unimaginable horrors. In others, he waffled through nonsensically, failing to maintain engagement, and confusing me utterly.

Harvey’s Dream gave such a chilling sense of foreboding, where N.’s density failed to garner any feeling other than irritating flashings of tedium. Mute twisted and turned its way into a ‘can’t fucking believe it’ redemption, with The Cat from Hell making my eyes roll, and not only because I truly hate cats.

I think this is a collection which you really have to try for yourself. I’ve read reviews where the stories I thought were crap are being raised high, where the ones I loved are being roasted alive. But I can guarantee you won’t like them all - pick through them and see which ones speak to you. Perhaps your choice says more about you as a person than it does King as a writer.
Posted by JK at 20:52