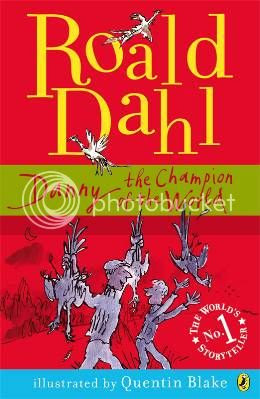 Danny the Champion of the World by Roald Dahl

Danny feels very lucky. He adores his life with his father, living in a gypsy caravan, listening to his stories, tending their gas station, puttering around the workshop, and occasionally taking off to fly home-built gas balloons and kites. His father has raised him on his own, ever since Danny's mother died when he was four months old. Life is peaceful and wonderful ... until he turns 9 and discovers his father's one vice. Soon Danny finds himself the mastermind behind the most incredible plot ever attempted against nasty Victor Hazell, a wealthy landowner with a bad attitude. Can they pull it off? If so, Danny will truly be the champion of the world.

This is a lovely story - one of Dahl's less zany works.

Dahl's writing here is wonderful. His descriptions of Danny's beautiful relationship with his father almost moved me to tears; it was almost lyrical. We are told at one point that Danny doesn't ever invite his school friends over simply because he loves spending time with his dad so much. I particularly liked the chapter where Danny's dad told him a bedtime story about the BFG! It was nice to see the origins of that.

Danny is one of the most adorable Dahl children; he is brave and warm, and just a generally lovely child. You can't help but love him. I liked that he was a normal little kid, living a normal little life. There were no Oompa Loompas, or magic powers, or potions, or witches. It was just Danny and his dad living in their quaint little caravan and living a cosy lifestyle. This was the book's charm for me.

Although morally questionable in places, I loved Dahl's descriptions of the various methods used in poaching pheasant. They seemed so ludicrous, but also feasible, and the fact that they managed to pull off their crazy idea made me love the two of them even more.

I think it's unfortunate that this one is often overlooked in favour of Dahl's crazier, more famous works, but it's definitely one of my favourites simply because of the beautiful father and son relationship we are shown. I would love to read this one to children; it's beautiful, powerful, and it's full of love.