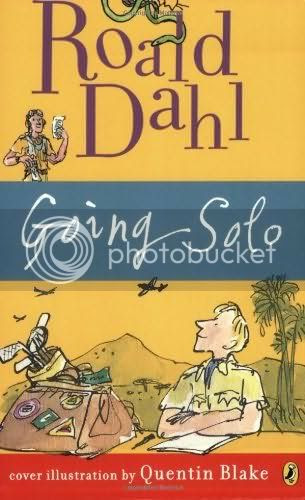 The second part of Roald Dahl's remarkable life story tells of his time working in Africa and his wartime exploits.

This is Dahl's second autobiographical work. It begins where its predecessor Boy left off, with Dahl moving to Africa to work.

I didn't enjoy this half as much as I enjoyed Boy, and I think this is due to the lack of whimsical boyhood tales and insight into Dahl's writing history and inspirations. This one was a lot more serious, giving details of Dahl's life as World War II broke out, and his initiation into and time with the RAF.

I loved Dahl's descriptions of the African landscapes, culture and animals. It really made me crave travel; his imagery is so wonderful that it's almost right in front of your eyes. The book was littered with photographs Dahl had taken on his travels, and each one of these was wonderful to look at - whether it was a scenic picture, or one of his old car, they were each one of them interesting.

Despite the doom and gloom of his time spent in the RAF; the times he stared Death in the face through lions, black mambas, and dogfight; and the depressing sights he had seen, Dahl's writing remains cheerful and witty throughout. I was amazed he survived as many times as he did in some of the situations he found himself in. He came out of these in one piece, and with personality enough to write this book and all of the other wonderful children's stories he went on to write. He was a wonderful man.

Dahl's style is effortless in every novel he has written. I'd recommend this one to Dahl fans, and people who'd like to find out more about him. It lacks a lot of the magic his fictional tales possess, but it's a wonderful insight into his life. The man is an inspiration.