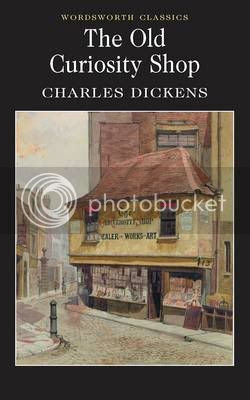 Described as a "tragedy of sorrows," this story tells of a girl uprooted from a secure and innocent childhood. Cast into a world where evil takes many shapes, little Nell meets the stunted, lecherous Quilp, whose demonic energy dominates the book. Sometimes fairytale and sometimes myth, this is Victorian life at its most bleak.

This has been my first real brush with Dickens, other than dabbling in A Christmas Carol last December. It has taken me around a month to read the novel, which is a long time for me. I wanted to make sure I wasn't missing out on anything, and as a result I have come away from it with a lovely feeling of satisfaction.

The characters were simply wonderful, my favourites being Whiskers the pony, or the lovely Dick Swiveller (his name throwing me into fits of giggles upon the first reading). I did notice that the characters were quite polarised - the good characters were intrinsically and impossibly good, the evil characters intrinsically evil, but the inbetweeners, the supporting characters, had good, evil, and a thousand other grey shades within their personalities. Dick was one of these characters, not entirely moral, slightly selfish and a mild alcoholic. However, by the end of the novel he was kind, gentle and entirely moralistic. Whiskers was a highlight due to his inability to follow orders, dragging his master’s cart wherever he thought suitable, and in his final act, kicking the doctor who had been hired to make him better.

The plot centres around a journey, which I found exciting as Nell and her grandfather fall in with all sort of characters, circus people and a travelling waxwork museum. It was quite eccentric and animated, and alluded greatly to how people of high class entertained themselves in these times.

I enjoy reading about 19th century Britain in the general, and here Dickens makes several social comments on inequality of class.

I particularly enjoyed "Chapter The Last" which served as a "What are they all doing now?" chapter. This was a wonderful finale, and filled me with satisfaction. It's lovely at the end of a novel to know that the good are living well, and the evil ones have had what they deserve.

I'd definitely recommend this one. It's not entirely plot-driven, which is why I think it took me so long to read, but is more a series of little stories about each of the characters. If you bear this in mind, you'll enjoy the novel.