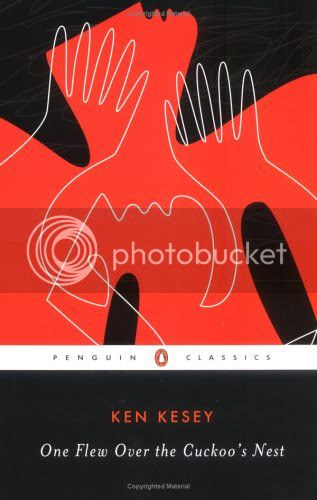 One Flew Over the Cuckoo's Nest by Ken Kesey

An inmate of a mental institution tries to find the freedom and independence denied him in the outside world.

I'd like to begin by mentioning that this is the first time I have read this novel, and I have never seen the film. I loved everything about it.

One flew east, one flew west. One flew over the cuckoo's nest. This rhyme alone is referring to being insane and being very far from home. I think even the title of the book in reference to this nursery rhyme lets you know exactly what you are in for.

Our narrator, Chief Bromden, is one of the most unreliable narrators I have come across. He is a paranoid hallucinating schizophrenic, so the narrative comes across as disjointed and, let’s face it, completely cuckoo. Despite these flaws, I fell in love with him. He comes across in the beginning as so weak and consumed by a fog he constantly believes to be there. By the end of the novel he has had such a journey that he is a completely different person. He often imagined the hospital itself to be controlled by an array of different machines and electronics - I loved this contrast with his past lifestyle, which was completely centred on earth, hunting and raw living. Chuck Palahniuk also made a comment about the novel which mirrors Chief Bromden's view of the hospital as mechanistic. He said the novel "focuses on the modern paradox of trying to be human in the well-oiled machine of a capitalist democracy." That's something worth considering.

Although Bromden was my favourite character, much has to be said about McMurphy. When he arrives in the ward, he is a spark of light in a depressing environment. He clashes considerably with the air of oppression, instead exhibiting symbols of freedom, sexuality, violence, and self-confidence. He immediately engages the head nurse (the source of the oppression) into a power struggle, and by doing so rallies the other patients into coming alive to help him in this war of wills.

Using McMurphy's booming character, Kesey really sends a message to us about the power of enjoyment and laughter. When McMurphy enters the ward for the first time, his laugh is the first real laugh that has occurred in the ward since anyone can remember. As the novel progresses, and McMurphy's influence becomes stronger, the men on the ward learn to laugh, and it seems through this they are able to grow stronger.

It is interesting to note that this novel was born from Ken Kesey's experiences of working night-shift in a mental health facility. No doubt he witnessed first-hand some of the events and situations in the novel. I find that incredibly intriguing, and his disturbing little sketches which were peppered throughout the novel did a lot to add to this appeal.

The tragic ending was awful, and almost an anti-climax as it didn't seem to enforce the message the book was trying to relate to us. However, such is life. Solutions do not always present themselves, and often, because of this, we are left with tragic endings. Despite this, the symbol of freedom from hopeless, trapped situations such as these transcends the tragedy, and makes the reader consider morality and human spirit.

Many have been heard to suggest that this is best American novel of all time. I have only just finished it an hour ago and I am severely inclined to agree with them. I could not recommend this novel enough.