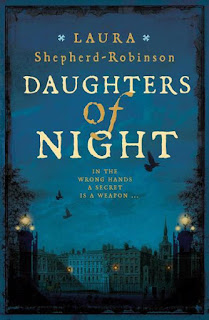 Daughters of Night by Laura Shepherd-Robinson

London, 1782. Desperate for her politician husband to return home from France, Caroline 'Caro' Corsham is already in a state of anxiety when she finds a well-dressed woman mortally wounded in the bowers of the Vauxhall Pleasure Gardens. The Bow Street constables are swift to act, until they discover that the deceased woman was a highly-paid prostitute, at which point they cease to care entirely. But Caro has motives of her own for wanting to see justice done, and so sets out to solve the crime herself. Enlisting the help of thieftaker, Peregrine Child, their inquiry delves into the hidden corners of Georgian society, a world of artifice, deception and secret lives.
But with many gentlemen refusing to speak about their dealings with the dead woman, and Caro's own reputation under threat, finding the killer will be harder, and more treacherous than she can know.


This book is a triumph - I loved it.

Shepherd-Robinson paints a vivid picture of Georgian London and its clandestine indiscretions. Caroline Corsham, a woman of wealth and sophistication, befriends an Italian noblewoman, Lucia, after introductions made at one of the frequent aristocratic gatherings she attends. Some time later, she finds her friend viciously attacked, and hears her last words - "he knows".

It soon becomes clear that Lucia was far from a noblewoman, and more of a prostitute, leading the magistrate to lose interest in the case. Caro becomes hellbent on solving the murder, and embroils herself into an investigation which proves devastatingly complicated, and utterly transfixing.

The plot is crafted with precision, the pace perfect. We twist and turn our way through what, at its heart, is a murder mystery, but becomes so much more than that. The skill in engaging her readers here is masterful; one awful thing leads to another until the reader is consumed by the words, plunging through the pages as though falling through a bottomless pit of iniquity.

There’s some wonderful social commentary here on the relationships between women and men, sex as a commodity, poverty, and best of all (my favourite in historical fiction), social scandal. The way in which men of importance were protected, and even revered, is a sorry state of affairs, but one which in many ways is still present today. To be female and to be poor limited these Georgian women, but Shepherd-Robinson makes it clear that even gender alone can limit the most wealthy and important of women.

It can become quite comfortable to view people living in the past as caricatures of their time, but here they’re so tangible, completely fleshed out to refinement. Each of their secrets, each of their flaws, whether they are major characters or not, are laid out like breadcrumbs throughout the pages. None of them perfect, all of them untrustworthy; it was a relief to see we had no heroes or villains here, just real people battling with the constraints of social code.

The whole thing was just a wonder to read. Georgian society, the social commentary, the intricacy of the plot and characters, and the suspenseful feeling of distrust rippling through the pages, all contributed immeasurably to my enjoyment. A masterpiece of historical fiction; one which took me by surprise.