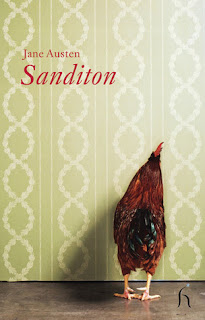 Charlotte Heywood is privileged to accompany Mr and Mrs Parker to their home in Sanditon – not least because, they assure her, it is soon to become the fashionable epicentre of society summers. Finding the town all but deserted, she is party to the machinations of her socially mobile hosts in their attempts to gather a respectable crowd, and Austen assembles a classic cast of characters of varying degrees of absurdity of sense.


There’s something quite sad about reading Austen’s final work, unfinished due to her progressing illness and subsequent death at the young age of 41. At a mere 100-odd pages, there isn’t a lot to work with, but there certainly is promise. Austen shows us Sanditon as an emerging village community, governed by two business partners (the fanatical Mr Parker, and the money-pinching Lady Denham) trying to improve its success.

Austen’s protagonist here is Charlotte, a girl of logical mind and simple upbringing, who is a perfect contrast to the other residents of Sanditon. Almost all of the characters, excepting Charlotte, are focused entirely on themselves and their desires, with Charlotte acting as a foil to their waggish whims.

I was interested in Austen’s commentary on hypochondria here; she introduces characters who claim to have a host of ailments, yet still manage (or are observed to manage) normal daily tasks or enjoyments just as well as their healthy relatives. It seems, whilst Austen’s illness was taking hold, she was thinking about these types of people, and probably scorning them in her mind. It’s also said that Austen ignored her illness for quite some time as it progressed, so it’s clear she was quite the opposite of a hypochondriac - perhaps to her detriment.

Sanditon struck me as a change to Austen’s usual format; instead of focusing on one family, she displays a number of families. It would have been wonderful to learn what happens to this seaside community; how they interact, the conflicts which may have arisen, the heartbreak. Unless you’re prepared to read works by other authors who have finished the novel on Austen’s behalf, the lives of those at Sanditon will forever remain incomplete.