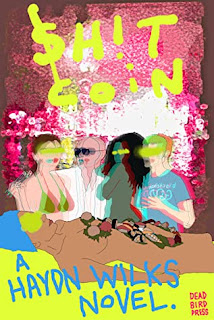 Three Dutch university students watch rap videos and dream of big yachts & banquets of sushi served on the naked bodies of supermodels. Could making millions of dollars be as easy as writing a few lines of computer code? How easily could they launch their own cryptocurrency?Alicia came to China from Malaysia to make her fortune. Now she’s trapped between working at a clothes factory and a seedy karaoke bar. One of the bar’s clients got rich mining bitcoin. Can she escape after emptying his wallet?Graham doesn’t know what cryptocurrency is but he knows it’s making people rich. That’s why the London hipster magazine he writes for sends him to Berlin to cover the crypto scene. Could it be an escape from a job he’s rapidly becoming too old for?The lives of these and many others across the world intersect as Future Synergy Coin becomes a multi-billion dollar enterprise. Yacht parties, trashed hotel suites, drug binges with celebrities, torture, sex, mutilation, & death. This wild story takes in crypto-crazed Korean office workers, crypto-accepting Eritrean drug dealers, and crypto-thieving American teenagers.It’s Wolf of Wall Street for the Instagram generation.


Having enjoyed two of Wilks’s previous novels The Death of Danny Daggers and Cold Calling, I was excited to get into this, although with some slight trepidation. I’m not an investment type of person, hell, I’m not even a numbers type of person, and I had only the slightest idea of how to define cryptocurrency.

Wilks clearly knew there would be lots of us crypto-dunces peppered around the reading realm, and does well to explain the mechanics of the alternative currency. It helped, but there was a lot of it. Lots of numbers, percentages, ups and downs, really detailed stuff that made my words-not-numbers brain begin to fog. I’m tempted to believe even numbers fanatics might grow tired, but perhaps it’s just me.

The parts I enjoyed much more than the mechanics of the currency, were those in which I was shown the motivations behind those who become obsessed with its rise and fall, who invest everything, or almost everything, in order to augment their fortunes, who are too frightened to cash out on the chance the rate rises yet again. People in debt, people with dreams, people who have nothing, and even people who have everything, are all in this digital gamble with differing, yet mostly devastating, consequences.

But our main focus here is the university students who create a new coin; who, far beyond anything they could ever have dreamed, become billionaires from the living room of their frat house. Quickly succumbing to the types of vice only immense wealth can allow you to splurge on, the students’ lives change immeasurably, fantastically, and disgustingly.

It was a lot to absorb. The pace felt incredibly off at times, some chapters or sections feeling much too long, with what seemed like a lot of unnecessary filler adding nothing. Other sections seemed to fly past, engagement high.

I also didn’t like that every female character here seemed to only have one of two functions; to be a mother, or to be a sex object. There’s a particularly interesting scene where three of the female students are having a deep discussion about the relationships they’re in with the guys, when one decides to leave as she has an essay due on the Bechdel test(?!)

It’s a definite slide away from Wilks’s usual work; with him, we’re more used to things being a lot more closer to home - humour, colloquialisms, call centres, grim council estates, and generally more relatable stuff than the dark recesses of cryptocurrency. With that said, you always get a wild, depraved journey with Wilks, and this was considerably more wild and depraved than his previous works, and anything else I’ve read recently.
Posted by JK at 18:30